I have a huge weakness for Printable I Spy Games for Kids, probably because my very first printable ever was this super simple Printable I Spy Valentine’s Card. It showed me that I can indeed make my own printables – and the rest is history 🙂

But it’s not only that. I Spy games are great quick and simple no-prep activities for toddlers and preschoolers who are learning to count to 10. At the same time, they can practice 1:1 correspondence, visual discrimination, number recognition, and more. 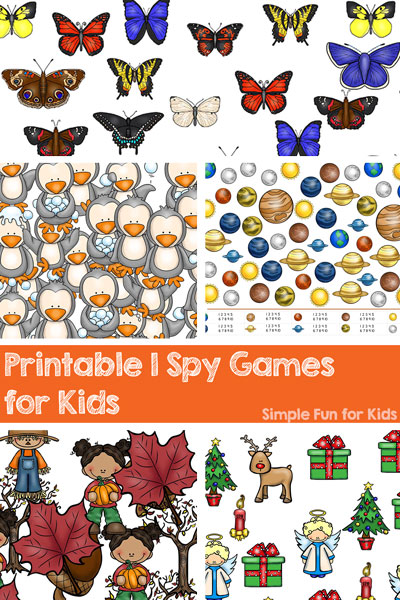 Since the first one, I’ve added a lot of I Spy games at different levels of difficulty and with a wide variety of themes: seasonal ones like Fall, Winter, Easter, Christmas, etc. and non-seasonal ones like butterflies, solar system, and sharks.

You can find them all below!

Need some I Spy game recommendations?

If you’re only getting started with I Spy games, the Valentine’s, Fall, and Christmas I Spy games are easier than most others, because coloration and/or shapes are very different, and because only a limited number of different images are used at a larger size.

For more advanced I Spy fans, the Penguin Snowball Play, Shamrock, and Butterfly I Spy games provide a greater challenge with similar coloring and a larger number of different images that are each smaller in size. The images in my Colorful Kites I Spy Game all have the same shapes, but they’re rotated randomly and a bit trickier to scan visually.

The most popular version is the Shark I Spy Game, and my personal favorite is the Halloween I Spy Game.

Which one is your favorite?

4th of July I Spy Game

I Spy My Valentine