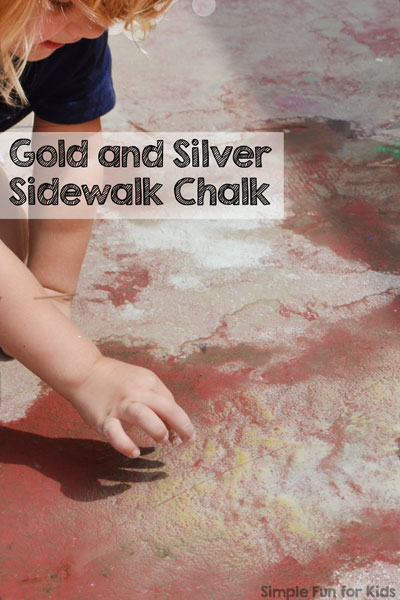 How to make Gold and Silver Sidewalk Chalk:

Mix cornstarch and water. A good place to start is probably equal parts but you need to find a consistency that works for you. You don’t want to make it too thick or it’ll be too hard to paint with. The cornstarch tends to start coming together to form a lump once the paint hasn’t been stirred for a while, so you may need to stir periodically while the paint is in use.

Add the gold and/or silver liquid watercolors. You want to make sure to shake the paint bottles extremely well, as the pigments tend to separate and settle at the bottom.

With the first batch we made, we added quite a large amount to make the gold and silver actually show up in the squeeze bottles somewhat, and it still didn’t look like much. In the second batch, we used more cornstarch, and that seemed to help the gold and silver pigments to show up better. I don’t think it made a huge difference once it was on the ground, though.

E loves sidewalk chalk, and we’ve painted with it many times.

Before I finally got around to ordering a set of liquid watercolors, we’d always used food coloring.

We used our new squeeze bottles {they were 97 cents at Walmart but I’m definitely in the market for different ones, as they leaked quite a bit} for a different painting experience and hand strengthening.

E thought it was all pretty awesome – gold or no gold.

The paint went pretty fast this way but just like any sidewalk chalk, you can always entertain yourself by standing in it and making nice footprints 😉

After a while, E convinced me to make another batch.

This time, she tried squeezing some into her dirt patch but it didn’t keep her attention.

Look how well the gold shows up in the bottle with this batch!

By now, the sun had come out for a short interlude and made the sidewalk chalk really shimmer.

E took a good look and tested the feel with her hand.

but it was definitely more of a splashing kind of day {and the chalk definitely benefited from being applied more … uhm … liberally}!

Once the sun came out for the first time after the gold and silver sidewalk chalk had dried, I took more pictures to give you an idea of how it looks dry but they don’t really do it justice.

Have you made your own sidewalk chalk before? What have you used gold and silver liquid watercolors for? Tell me in the comments, and feel free to leave a link if you’ve written about it!