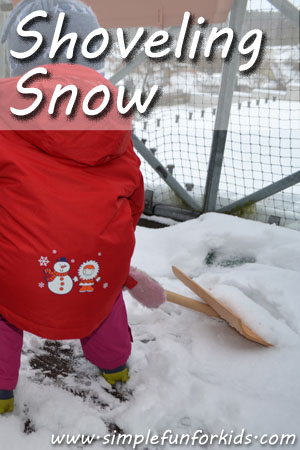 The short story: Give snow shovel to child, stand back and watch the fun (or get your own shovel and participate).

The idea: Last winter, my dad gave us a child-sized snow shovel. Given that E had only started walking in early October, it never really occurred to us to let her try it out that winter, and we pretty much forgot about it during the first snow of this season. I kept seeing those shovels all over the place and was pretty tempted to buy one – until I happened to find the one we already had at the back of the pantry 😉

One day, as we came in after I picked her up from day care, I gave E the snow shovel and told her to try it out on the snow on our small balcony. She knew just what to do with it right away, and expanded the activity by using the broom that was already on the balcony.

After a while her creative juices started flowing, so she went to get her child-sized dustpan and broom, mop, and miscellaneous items from her Lego Duplo farm. That still wasn’t enough, so she asked for a spoon, and while we were in the kitchen to get it, she also retrieved the full-size dustpan and broom. She spent quite some time spooning snow into her Duplo milk bucket to half-eat, half-drink the snow 😉 It sure is nice to have access to truly pristine snow (well, as pristine as snow gets, I suppose). Towards the end, E found a piece of moss by the door and asked what it was. I explained, and she touched and squeezed it, then declared she’d cook something with it 😉

When she was done with the snow, she wanted to leave everything out there but after a reminder that we needed to pick up after ourselves, I stood on the balcony and handed her a few items at a time, and she happily ran all over the apartment to put them away.

What I learned from it: Minimal supplies can keep a toddler amused for more than 30 minutes. It might have been more if I hadn’t been taking so many pictures that E decided she now wanted to look at them 😉 Looking forward to many more successful winter outdoor activities!

Hi and welcome to Simple Fun for Kids! I'm Tina, mom of a kindergartener and a toddler, wife, German in Texas, blogger at all hours of the night. Click here to find out more about me...