We love to play with baking soda and vinegar {and variations like our Fizzy Puddle and Giant Soapy Eruptions}. With Halloween coming up, I wanted to give this activity a seasonal spin – and was inspired by Learn Play Imagine’s Color Surprise Eruptions to hide some goodies in plain white baking soda. 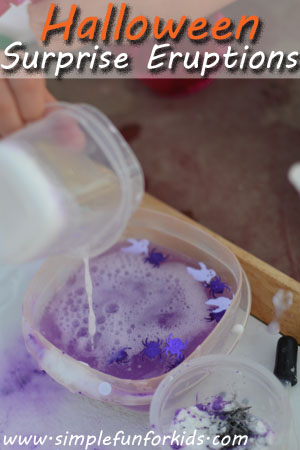 I prepared the containers of baking soda in advance because it was supposed to be a surprise but also because it did take something of a steady hand, and it wouldn’t have done to jostle the containers once the powder paint went in.

I set up four containers: In addition to baking soda, one had purple powder tempera and purple metallic spiders, one had black powder tempera, black spiderwebs and black stars, the third had orange powder paint and orange-y metallic pumpkins, and the fourth had no paint, just white ghosts and googly eyes.

I used about two tablespoons of baking soda at the bottom of each container, then I added just a little bit (maybe a quarter teaspoon) of powder tempera and a few pieces of Halloween confetti in coordinating colors. On top went another tablespoon of baking soda. 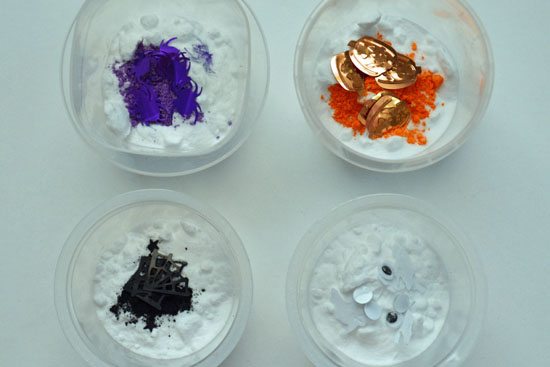 When I set up the activity for E, it looked like there was plain baking soda in the containers. I put vinegar into a spray bottle, a squeeze bottle and a bowl with an eye dropper.

E didn’t mind the “boring” baking soda at all – she was excited as soon as she saw it and got straight to spraying vinegar. 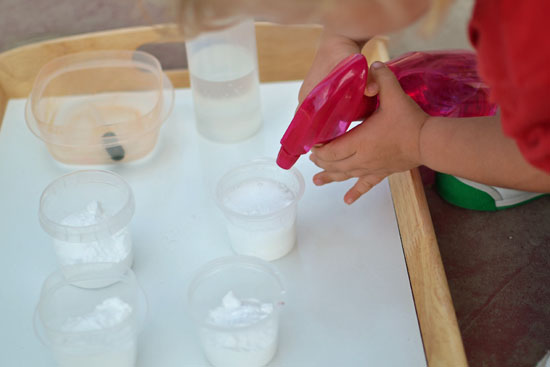 She happened to start on the container with no added color, and after a good amount of spraying and squeezing vinegar into it and giggling at the familiar yet always entertaining reaction, she decided to dump the contents into the larger bowl of vinegar. She used the eye dropper to stir and move some extra baking soda around – and now the first few googly eyes became visible! 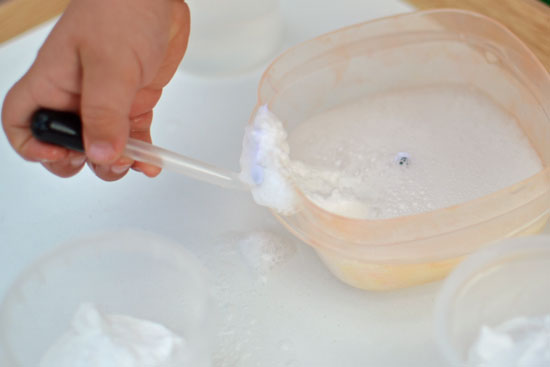 After some more experimenting with the truly white container, to E’s delight, the ghosts showed up in the larger bowl as well.

She turned to the “black” container next, still using the eye dropper like a stick – in fact, there was no dropping vinegar in this activity at all. Once the spiderwebs appeared, she didn’t add any more vinegar to this particular container for some reason. {Not until later, anyway.} 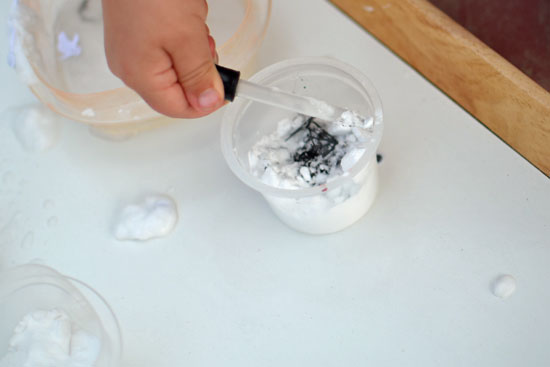 Therefore, the vinegar never reached the black paint to make black eruptions before E turned to the “purple” container and really squeezed a large amount of vinegar into it all at once. Yoohoo, a purple eruption! 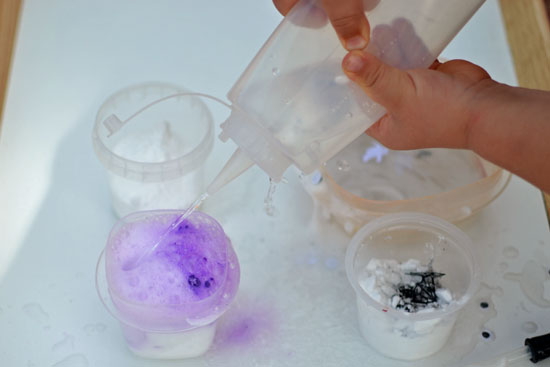 After the first bout of excitement, she dumped the contents into the larger bowl as well – and now there were SPIDERS! 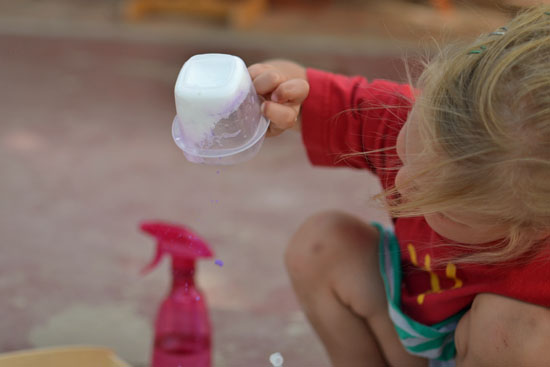 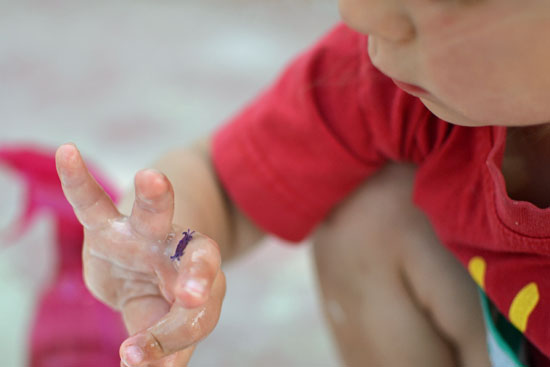 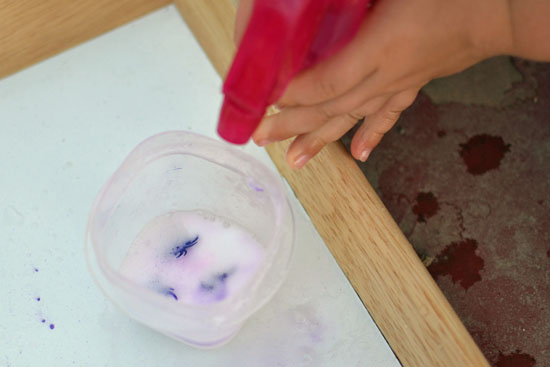 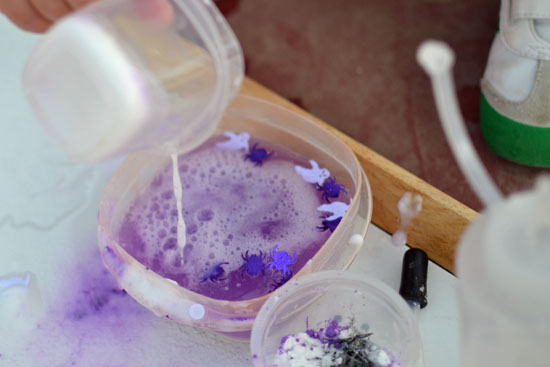 When the larger bowl was almost full, E decided to pour the liquid back into a small container {to my surprise, it actually almost fit in there}. 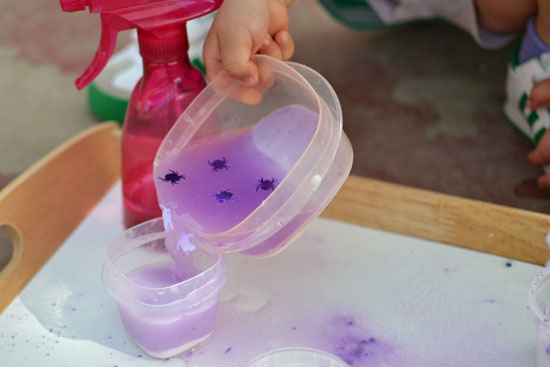 The soggy baking soda that remained at the bottom invited E to explore further. 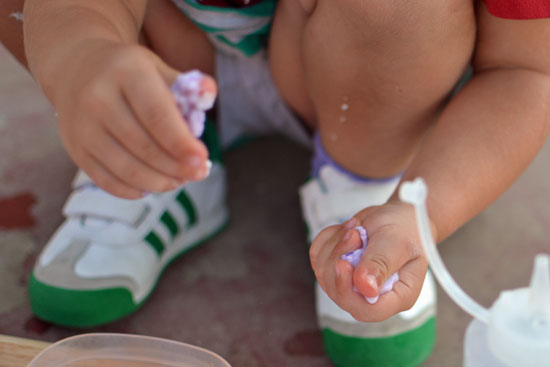 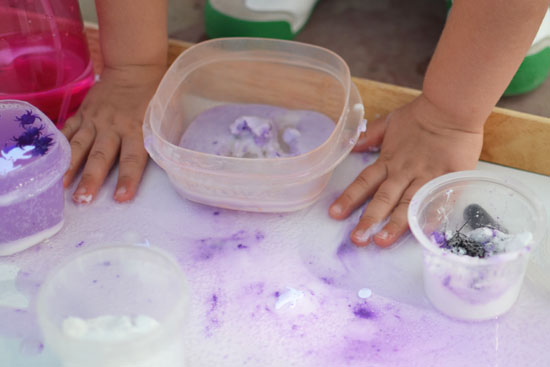 Afterwards, E got to work on the “orange” container and repeated her routine of spraying, squeezing and dumping to get the pumpkins out. 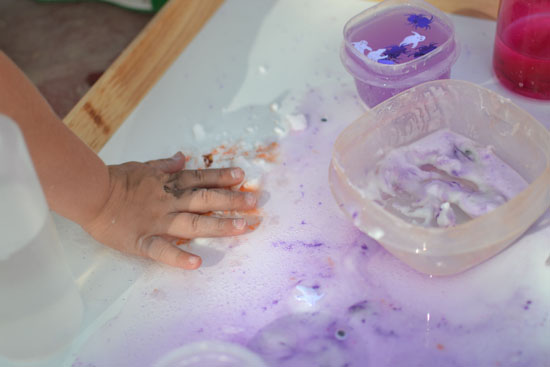 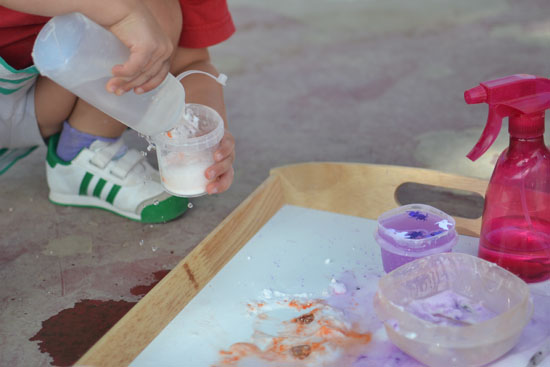 She randomly decided that we needed to move the tray from the shade to a sunny spot, where she did more spraying, squeezing, exploring, pouring, and of course making things FIZZ! 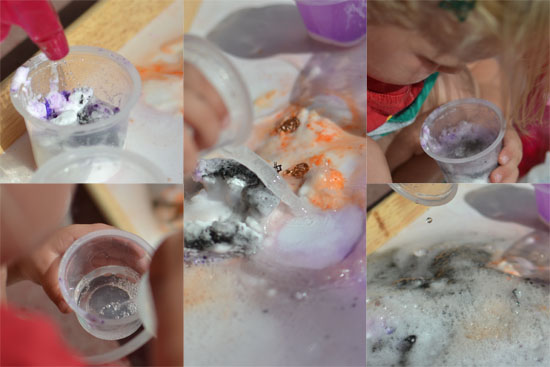 I’d expected everything to turn black pretty quickly but E pretty much saved the black container for last, and even then, the orange in particular was surprisingly dominant, 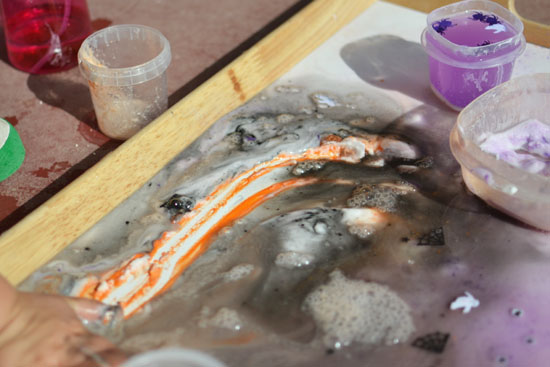 and once everything had been suitably mixed and E was done with the activity, we were left with a fairly light, brownish liquid.

Now, the confetti didn’t quite work out as I’d hoped – I’d thought it’d be light enough to come up during the eruptions, and maybe it would’ve been if I’d used less baking soda on top. But that didn’t detract from the activity at all, E had so much fun for more than 40 minutes and kept giggling and saying “Look at that!” throughout!

Have you done any Halloween science? Have you tried surprise eruptions? Tell me in the comments, and feel free to leave a link if you’ve posted about it!