I’d been wanting to do to an ice excavation activity with salt for a while {I really wanted to see how well it worked, as I’d actually never tried it myself, not even when I was a kid…} but never quite got around to actually doing the freezing. Yesterday, I came across our ice cube hearts tray, and inspiration struck! I decided to give the activity a Valentine’s spin and send E on a Valentine’s treasure hunt! 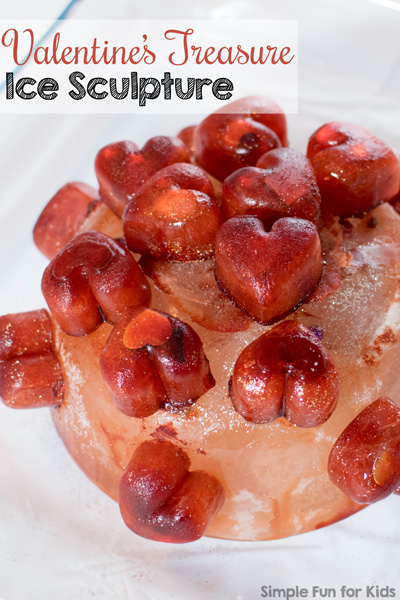 I decided to use some Kool Aid that I found in the back of the pantry for this. We really hadn’t used Kool Aid in a while, since liquid watercolors just tend to be more convenient. I didn’t really remember the drawback of Kool Aid – but I was reminded pretty quickly: It turns fingers red. Bright red. And it doesn’t always wash off completely right away – it took a few hours for it to disappear from our hands. Not really a big deal to us, and it did smell great, you just have to weigh the pros and cons for yourself 😉

I placed a few gems in each of the cavities of the ice cube mold, then mixed the Kool Aid with just enough water to fill the ice cube tray – it was much less than you’d use if you wanted to drink the Kool Aid, which contributed to a deeper red for both the hearts and our fingers 😉 Then I added a bit of silver glitter, stirred well, and poured the mixture into the tray.

After I’d placed the ice cube tray into the freezer, I started wondering how long it might take for the hearts to melt. Since I’d never done an ice melting experiment before, I was worried that the hearts would melt too quickly. I decided to put the little bit of Kool Aid/water/glitter mix that was left into a small plastic bowl along with a few more gems and top it off with plain water, then placed the bowl into the freezer as well.

The next day, I pulled the bowl and ice cube tray out of the freezer, and out of nowhere, E appeared 😉 She was intrigued immediately, even before she noticed the treasure. {The water in the bowl had actually expanded a bit while freezing, making the top and bottom uneven but it didn’t make a difference. The ice had also pulled away from the sides of the bowl, so it was super easy to remove.} 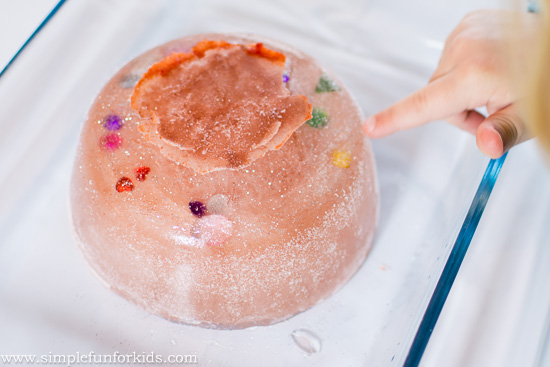 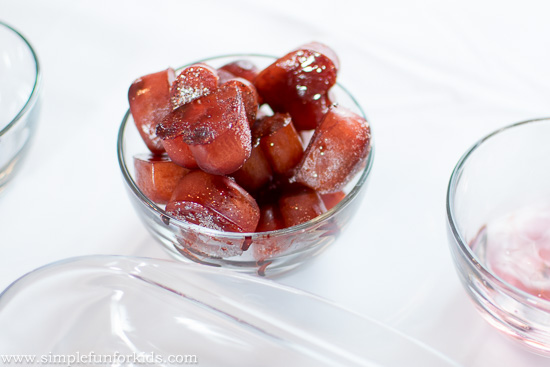 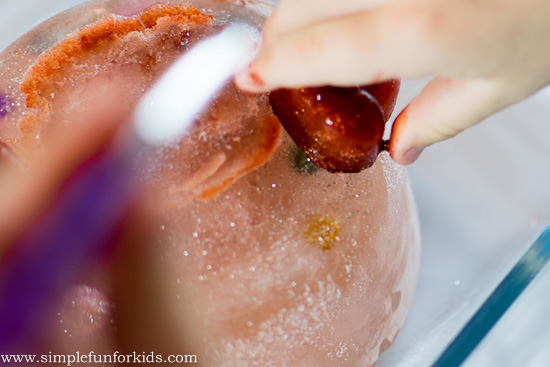 E only did a few because the ice hearts were too cold on her fingers, and I finished the rest of the hearts. 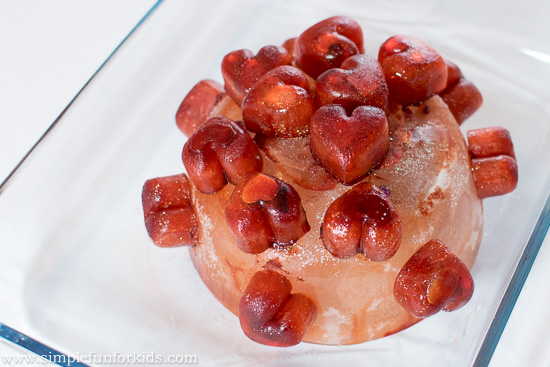 Now, E went to work with the eye dropper with room temperature water 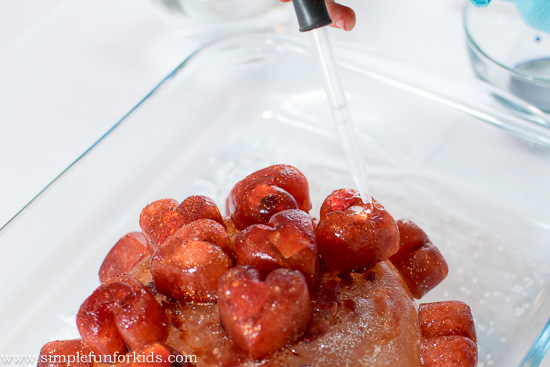 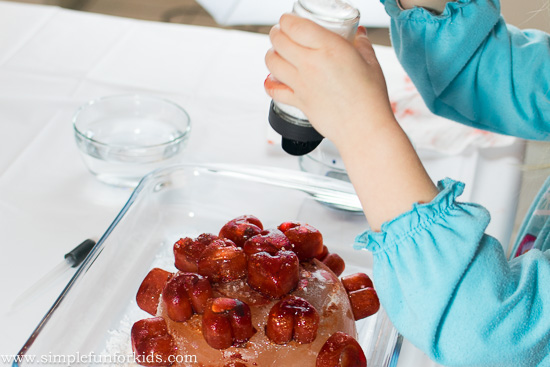 She also tried to get to the gems with her fingers and was a bit confused about why that didn’t work. 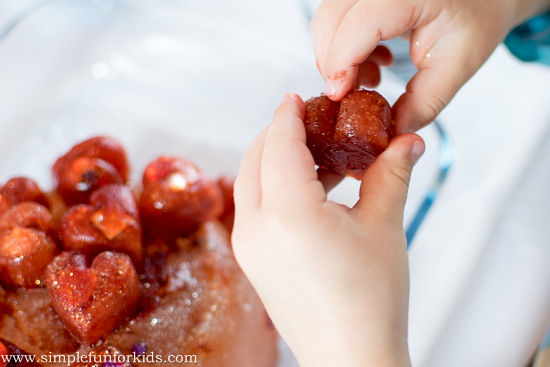 She tried the blue liquid watercolors I’d provided but it was a bit underwhelming. My visions of the red and blue mixing to a beautiful purple didn’t come true 😉 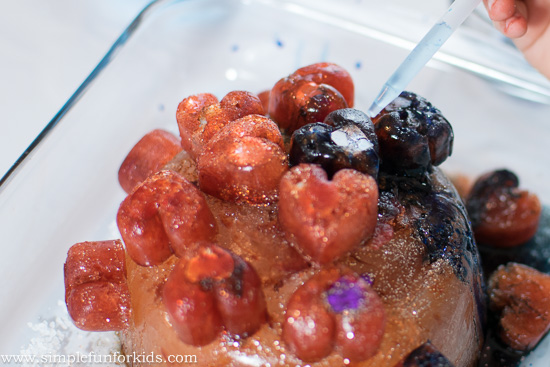 The salt also seemed to do disappointingly little – until we noticed how the blue watercolors had made their way down the side of the ice sculpture, following the path of the salt. So beautiful! 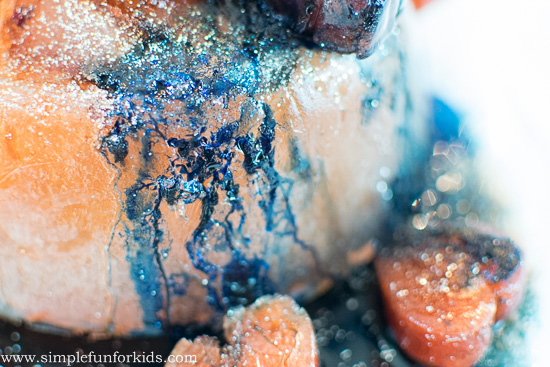 I shouldn’t have worried about how long it takes the hearts to melt – they would have lasted well long enough on their own. In fact, we still had most of the ice sculpture pretty much intact, and only two gems excavated, when E started losing interest.

I put the rest of the ice sculpture back into the freezer to save it for another day, then went to pour water into the baking dish to rinse it – and suddenly, the baking dish was filled with beautiful purple glittery water! My color mixing vision had only needed more water 🙂

It piqued E’s interest as well, and we decided to put the ice sculpture back into the baking dish. 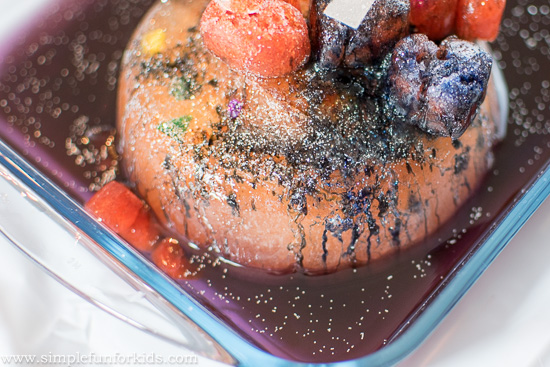 This way, it held E’s attention for a while longer, and she was able to excavate several more gems. 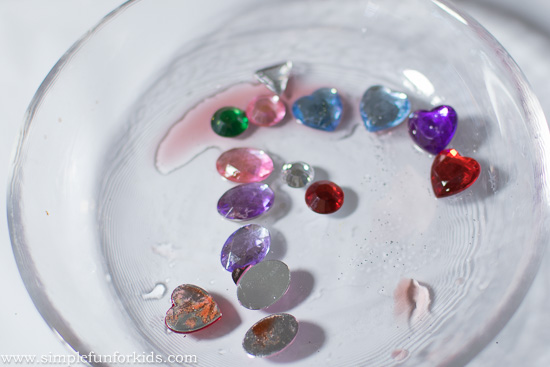 Even when E had finally had enough, we still had plenty of ice left to have fun with another day.

Have you played with ice excavation? Have you tried a Valentine’s treasure hunt? Leave a comment and tell me all about it! Feel free to leave a link if you’ve written about it.