We had so much wonderful snow outside, and I couldn’t wait for E to explore it. Unfortunately, it hasn’t always been easy (or fast) to get E bundled into her clothes once she had them off. {The taking-off part has been lightning fast to compensate 😉 } So rather than get E outdoors, I decided to get part of the outdoors inside and make a snow sensory tub. 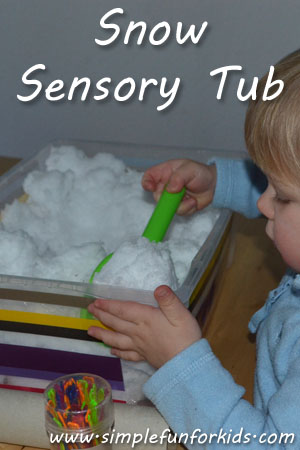 How to set up your own snow sensory tub:

We used a plastic storage tub – our standard sensory play tub. A bucket, a pot or even just a tray would work fine as well.

If the bucket is too high, you can lay it on its side on a table, or put it on the floor so your kid can stand over it. Simply fill it with snow and let your child explore.

In addition, we had food coloring, different kinds of kitchen ladles, play doh tools, party picks, a cardboard roll, a plastic cup and two plastic bowls. You can add whatever you can think of, or even better, what your child asks for once he gets into exploring.

E was immediately enthralled by the idea of having snow inside and not having to get dressed for it. She explored it with tools and without, dumping it into bowls and back into the tub. 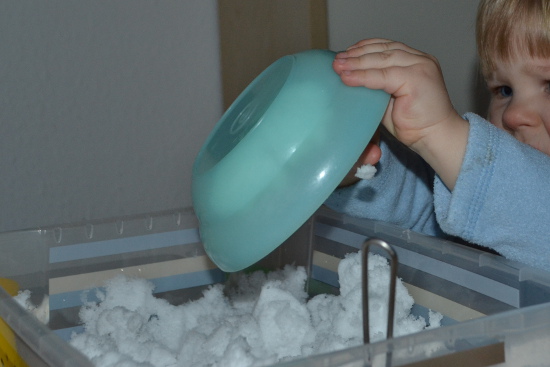 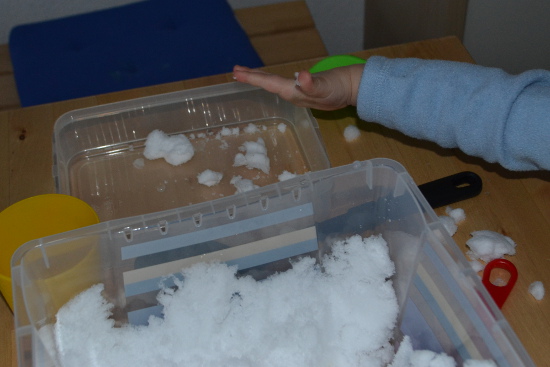 After a while, I gave her some food colors. We started out with orange which was … uhm … not a good choice as I soon noticed. It turned yellow awfully quickly, and in combination with snow, it just wasn’t a good look. It felt a little bit like a missed teaching opportunity, too 😉 Then again, at least E wasn’t attempting to eat the snow, that would’ve been really disquieting. In the following picture, it was at least still sort of orange. 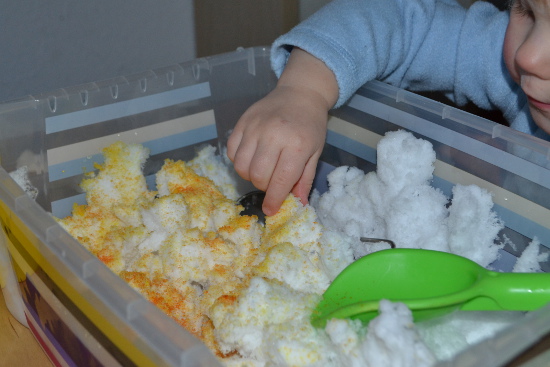 A bit later, I gave E some purple food coloring to offset the yellow a bit. 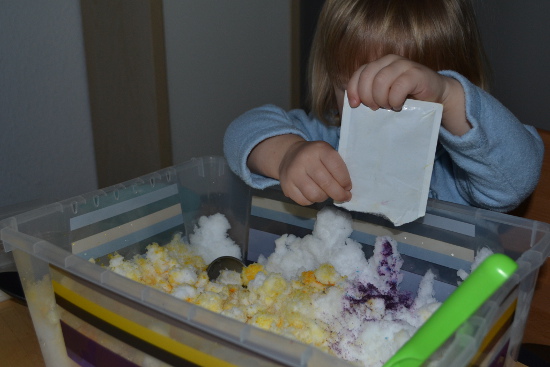 After a while, this was what we got.

After about 30 minutes, when E stopped playing, the amount of snow had been drastically reduced but there was still no water in the tub, which was pretty cool because I’d actually expected it to turn into a sludgy mess. {Which would’ve been cool in a whole different way 😉 } Of course we were able to fix the lack of sludge – we put the tub in the sink and added water. This way, even the clean-up was interesting. 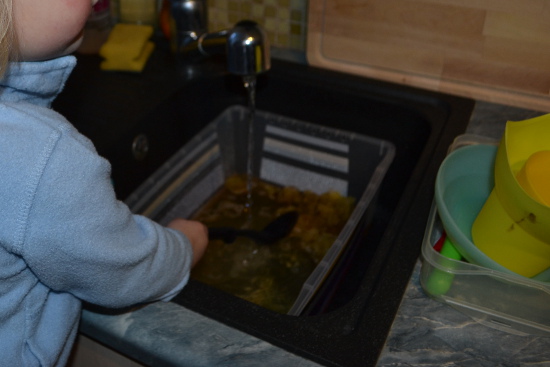 Have you played with snow in a tub? Have you done another outdoor activity indoors? Leave a comment and tell me all about it!