Last winter, E hoped for snow every single day. She really wanted to build a snowman, or rather snowmen – big ones for Papa and me, a small one for herself, and a tiny one for her then unborn baby brother <3

When I saw Fun at Home with Kids’ Magic Foaming Dough that they used to build (and melt) indoor snowmen, I knew it was the perfect material for us to somewhat make up for the lack of real snow. 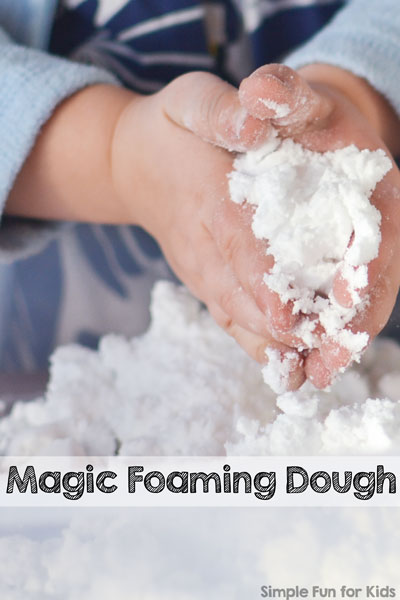 Note: Magic Foaming Dough is not to be confused with Foam Dough (which may be magic/fizzy or not), the latter being made with shaving cream!

I set up the sensory bin for E outside because it was nice, sunny and fairly warm, but we had to move inside after a few minutes because it was simply too windy.

She started out just digging through this new sensory material and feeling it in her hands. 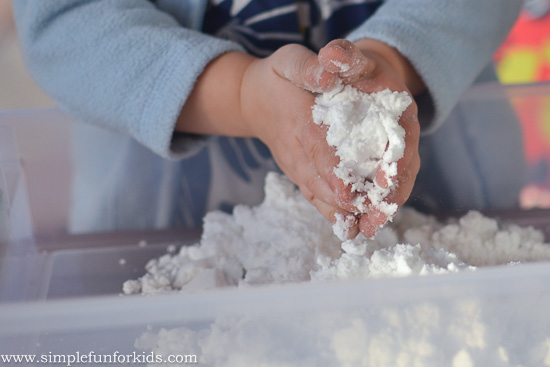 She tried to make “snowballs” but wasn’t satisfied with her results, and asked me to make her some. The magic foaming dough came together easily when I pressed it in my hands. 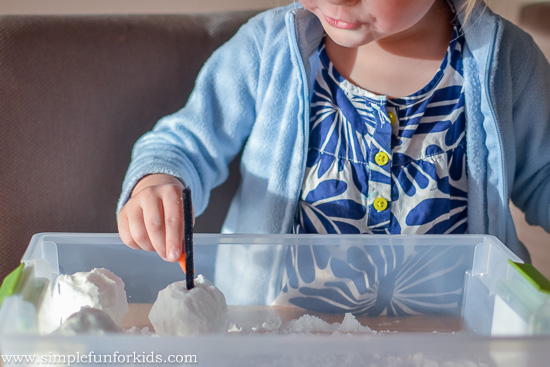 After decorating the snowballs for a bit, E took them apart and asked for our silicone cupcake liners. Sure, she’d longed to make a snowman but this dough seemed to remind her of her love for pretend cupcakes – and that was just fine with me!

She packed the cupcake liners full of magic foaming dough, then squeezed vinegar on top to reveal the wonderfully fizzy reaction. 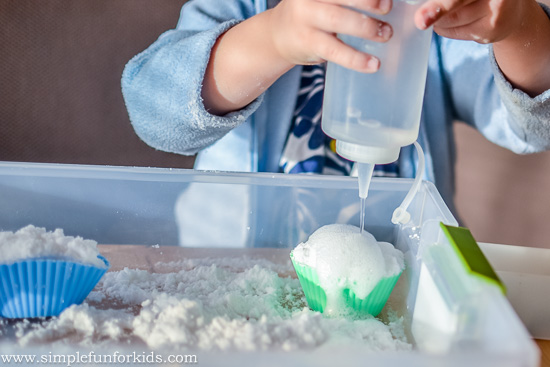 Two cupcake liners’ worth of dough was even more impressive. 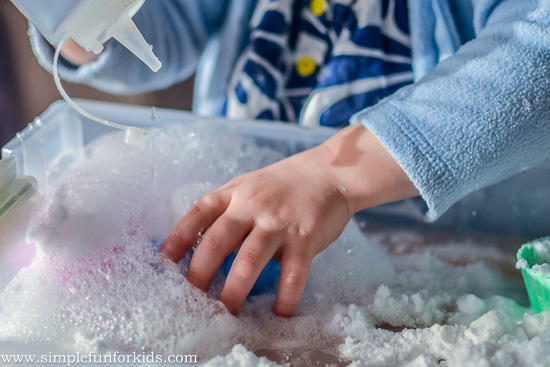 E added a plastic spoon to her play, and spent quite some time making cupcakes.

She served me some 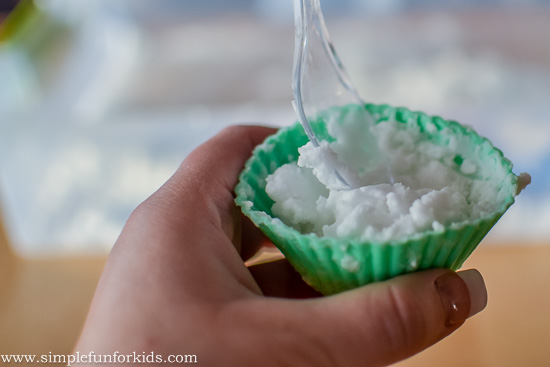 and we both pretended to taste them. They were perfect, of course 🙂

The cut up pipe cleaners that I’d thought would be a snowman’s arms became birthday candles instead. 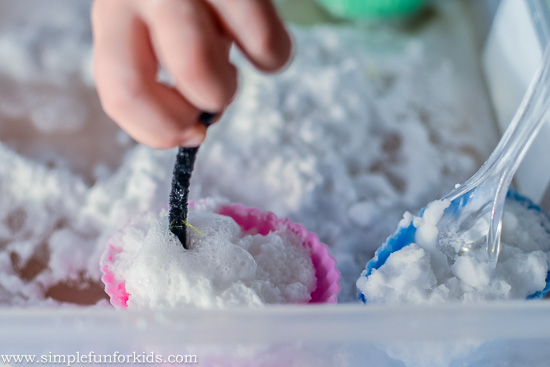 When she’d had enough of cupcakes, she poured the rest of the vinegar into the container that I’d put the loose parts into, then spooned some of the magic foaming dough into it until it overflowed. 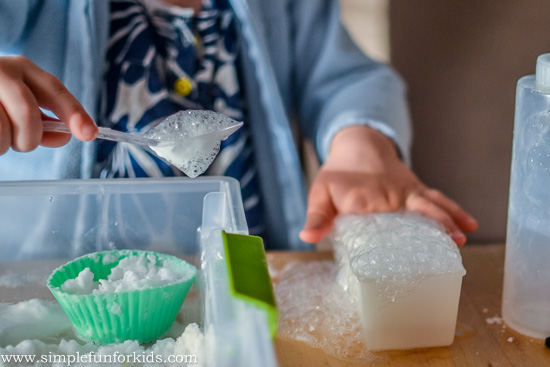 This led to even more impressive bubbles. 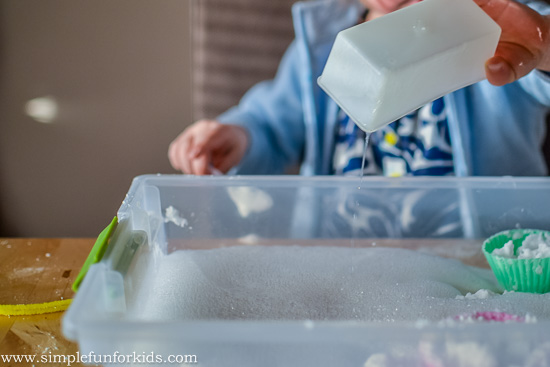 She made some more cupcakes but by then, it was time for dinner, and we had to take a break. 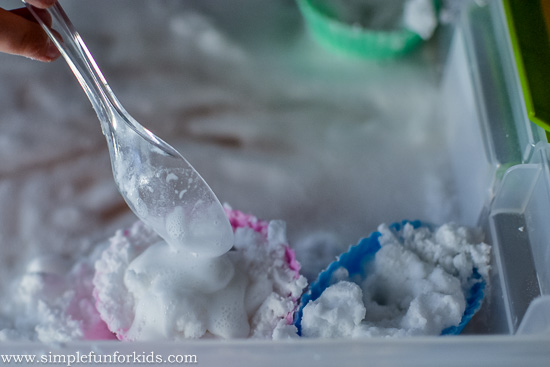 After dinner, E came back to her magic foaming dough to clean up.

But the activity was just too much fun to clean it up without getting some more eruptions out of it!

E spooned a lot of dough into the squeeze bottle. This turned out to not be the best idea when it came to actually cleaning that bottle later – it was really hard to get all the baking soda out! 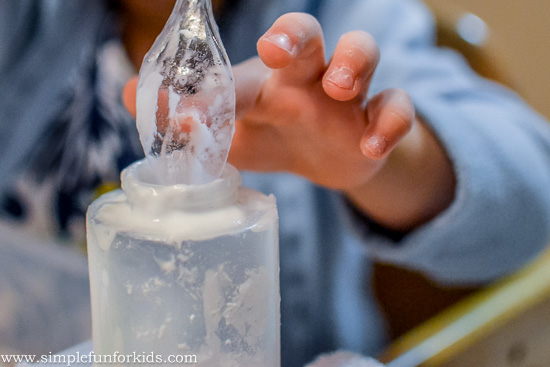 But hey, it made for awesome eruptions, so it was totally worth it 🙂 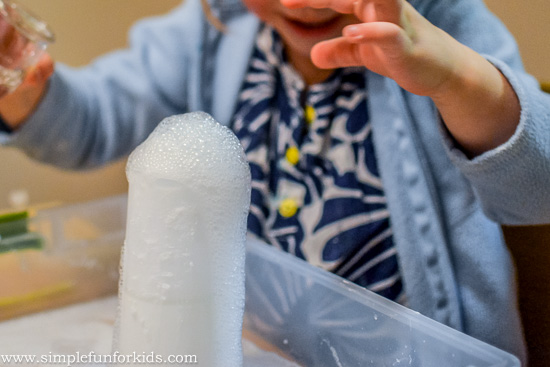 Have you tried magic foaming dough? What’s your favorite indoor snow substitute? Leave a comment below!