I’d been planning to play with slime for a while but my attempt at making glitter slime didn’t turn out as expected. I left the failed slime in a covered bowl and completely forgot about it.

About two months later, I looked at the bowl again and found that the materials had combined on their own. It still wasn’t quite the slime I’d had in mind but it was a silky, somewhat stretchy dough that was fun to touch, so I set up an invitation to play with slime for E. 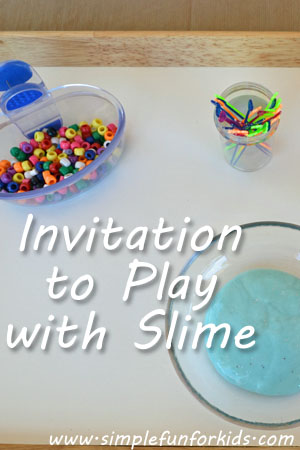 Note: Given the materials for slime, I wouldn’t recommend doing this with kids who may want to have a taste. You can easily go with play dough for them.

I set up the materials on a tray for E to find. 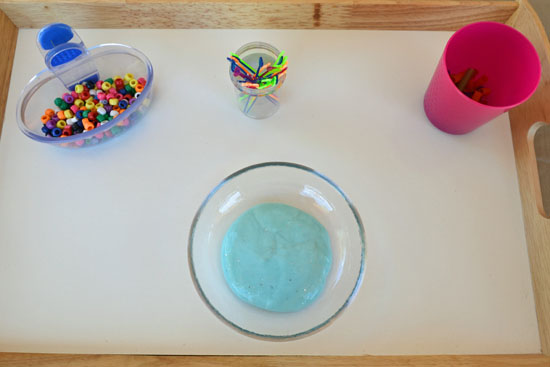 Before I was even able to sit down with her, she’d already pushed a few beads into the slime, torn off a piece and started making a “snake”. {This was the first time she succeeded in making a snake, although she’d tried several times with play dough before.} 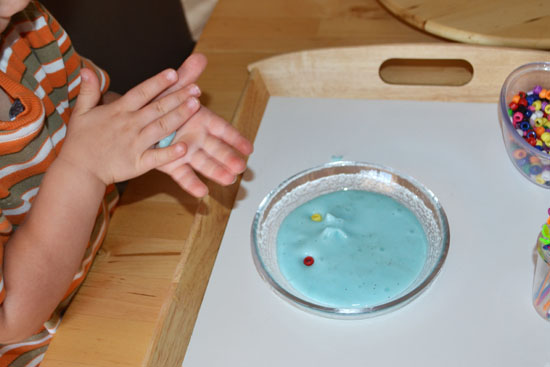 She was quite proud of her snake and offered it to me. 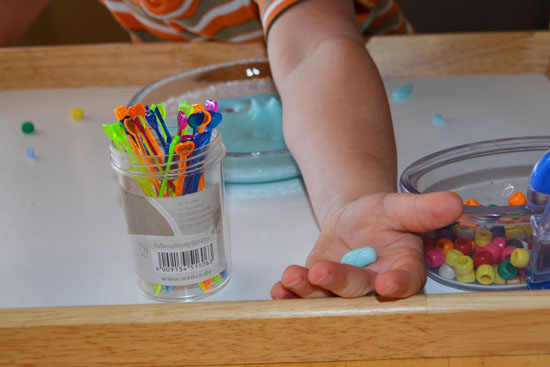 Our slime wasn’t as stretchy as expected but still had some fun stretch. 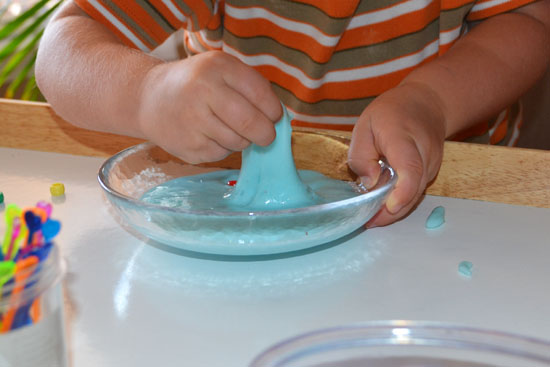 E kept tearing off pieces of slime and exploring them with her hands. 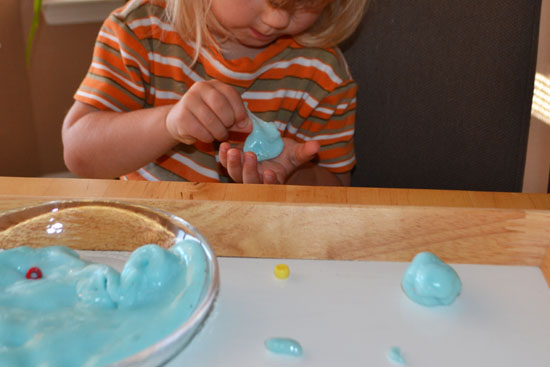 The party picks were fun for stabbing the slime. 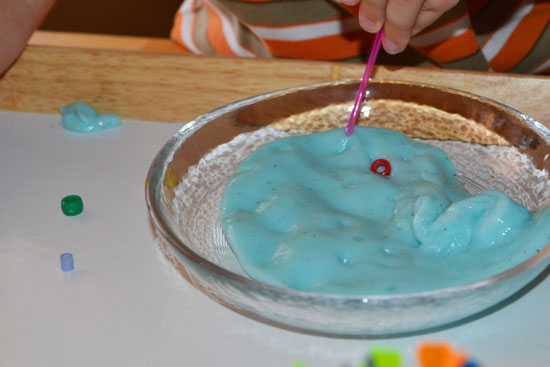 When the stars aligned just right, E even managed a really big stretch! 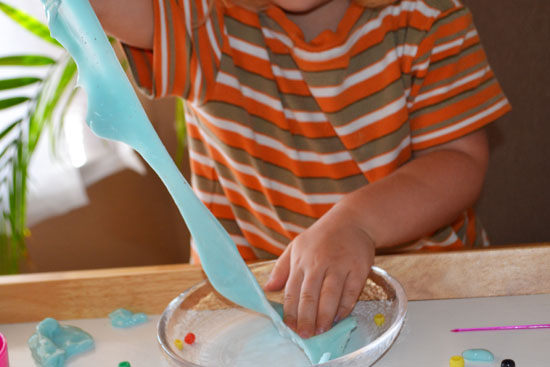 Big enough to wrap around her hand. 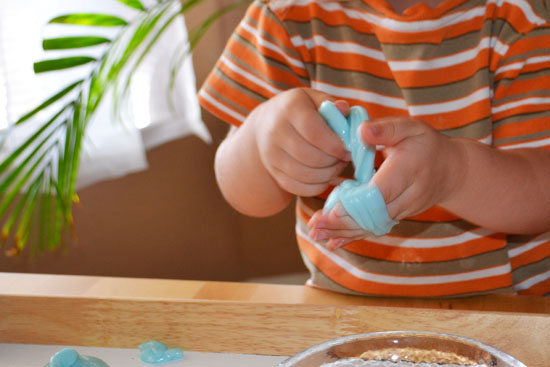 And big enough to tear into small pieces again 😉 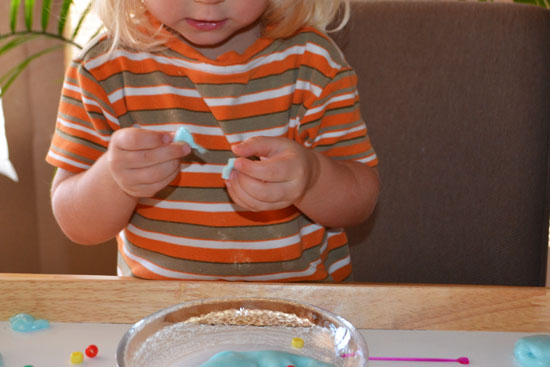 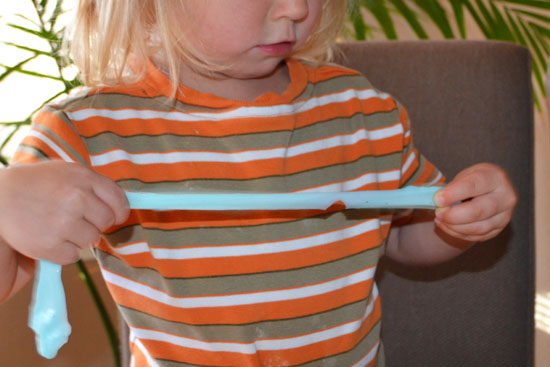 The slime would slowly melt when it wasn’t handled for a while, and I set a blob on the edge of the tray to document the process – well, it sure flattened out quickly when E slammed her hand on it 😉 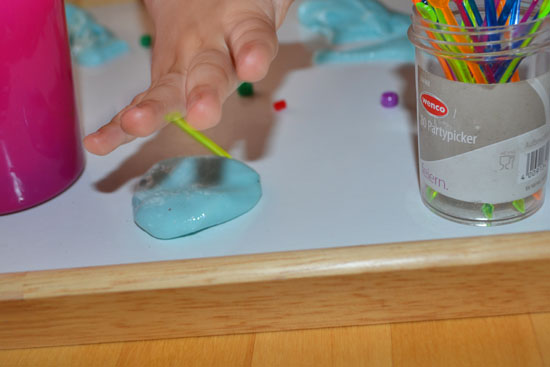 E really enjoyed tearing up the slime and made snakes over and over again. 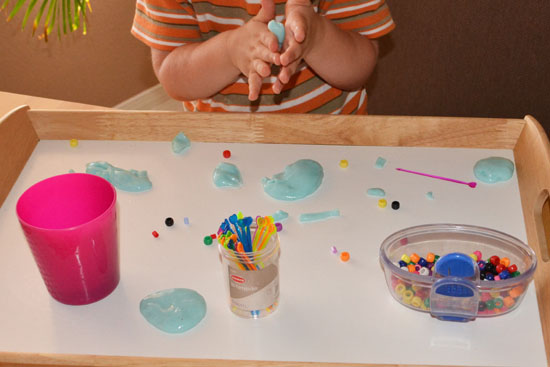 To finish the activity, she dumped a couple of handfuls of beads on the tray just so she could put them back into the bowl 😉 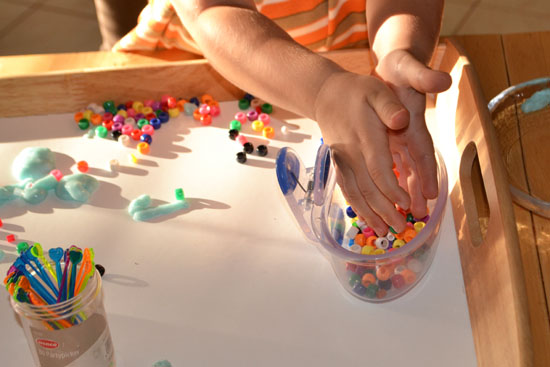 This slime isn’t messy or sticky at all and wipes right off non-porous surfaces like the tray, table and tiles on the floor, and the one spot we did get on one of my chair covers, I was able to wipe up with a sponge even though it had already had about 30 minutes to dry.