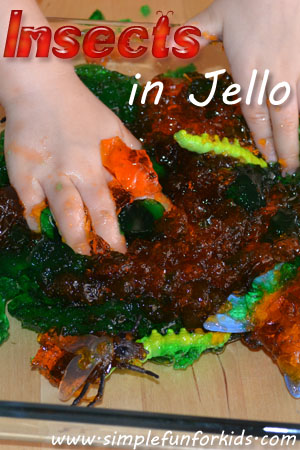 How to put insects in jello:

Prepare the jello according to the directions, then drop in the plastic insects, place in the fridge and wait a few hours until the jello is set. That’s all there is to it. If you’re worried that cheap plastic animals can’t withstand boiling water, you can let the jello cool down a bit before you insert the insects.

I made two bowls of jello, one orange, one lime, and tried to avoid using the “grosser” insects in the set 😉 {My husband still thought it was pretty gross 😉 }

Once the jello had set, I simply put the bowls on the table with a few empty bowls, a spoon, a fork and some tongs {E had randomly asked where our tongs were before bed the night before, so I thought she’d enjoy using them – and she sure did!}.

She started out using the tongs to move jello from one bowl to the other.

She also explored the jello with her hands, remarking how “cold” it was.

Then she discovered the first insect and was enthralled.

She carefully set the insects out in the pyrex baking dish

before she decided that they needed to be covered in jello again and dumped the mixed jello from the plastic bowls on top.

E picked up the insects with her tongs again, then put them back and squished the jello with her hands.

Back to the tongs and transferring chunks of jello to other bowls. This particular chunk got her imagination going, and she announced that she was now cooking meat.

Of course you need the proper equipment to cook – so she got up and went to get the pan she uses for pretend cooking, then dumped the jello, insects and all, into the pan.

She stirred with the tongs

and piled up all the insects on top of each other.

Every time she picked out an insect, she smiled fondly at it. This one got her talking about The Little Hungry Caterpillar book that we sadly hadn’t read in a while {time to make up for lost time!}.

For the second caterpillar, she gave the fork a try.

Whenever E cooks, she always warns me to stay away because it’s hot {wherever does she get that? 😉 } but this was the first time she thought to incorporate an oven mitt in her play.

When she was pretty much done with this activity, she started sorting the insects back into a smaller bowl. First, she simply used her hands

then decided to find out what it’s like to use the oven mitt to pick up the insects.

It took her a few tries to grab the butterfly but by the time she picked up the centipede, she’d gotten the hang of it.