Halloween is getting closer, and black, orange and white are everywhere! It still doesn’t even really feel like fall around here, so I made some homemade Halloween play dough and set it up as an invitation to play with Halloween toothpicks and cupcake toppers, Halloween cupcake liners and Halloween cookie cutters to get us in the mood. 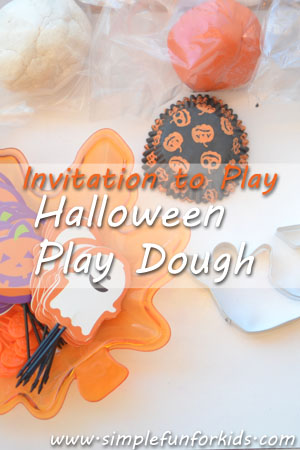 I simply set out the play dough and all the parts on a tray for E to find. 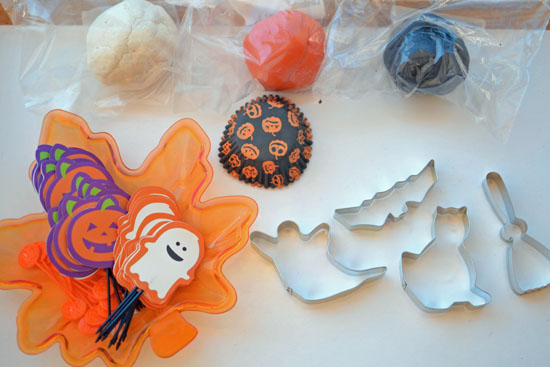 The first thing she said while climbing into her chair was that she would make “cakes” 😉 We’d never used cupcake liners for anything before, so I was impressed that she caught on right away.

By the time she was sitting, the cupcake toppers were more interesting, though, and she started out just sticking them into the balls of play dough repeatedly. 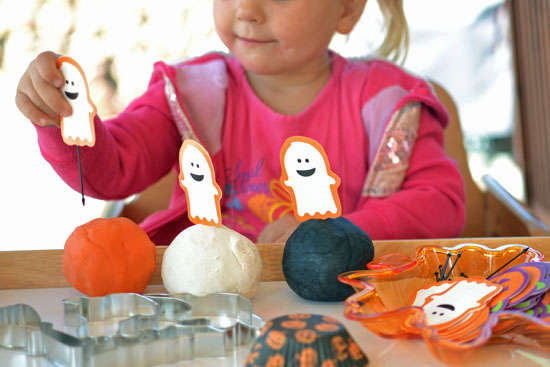 Unsurprisingly, the toppers weren’t really that stable, and she spent some time trying to put them back together. 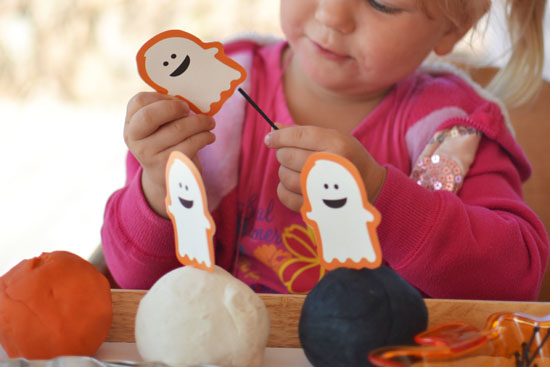 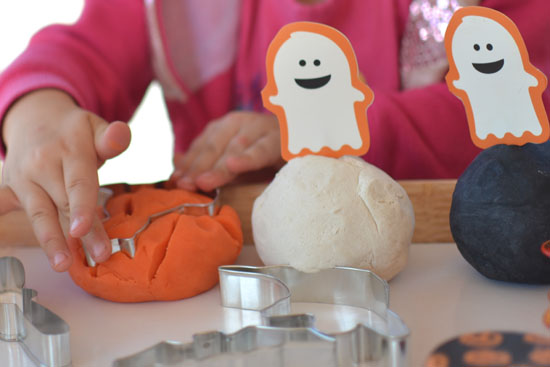 but they didn’t keep her attention for long because now she remembered the cupcake liners. The first cupcake was for me 🙂 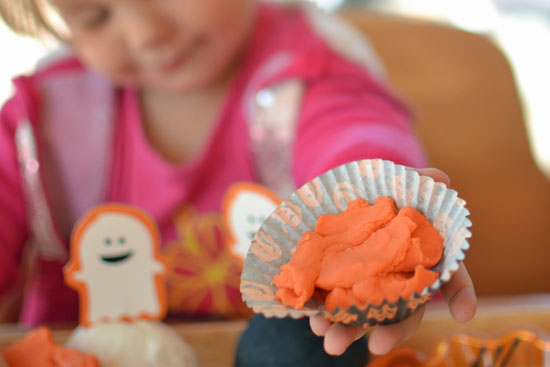 She made another orange one for Papa before she turned to the black play dough because “Opa wants black!” 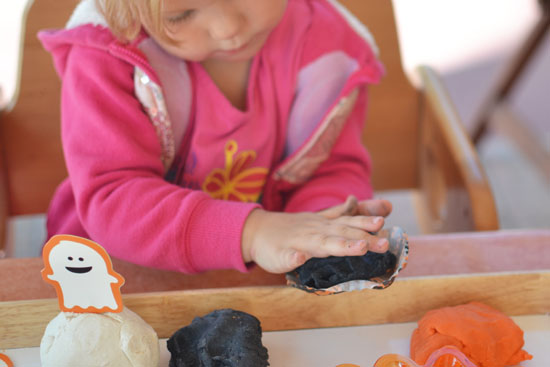 She used the rest of the cupcake liners for some extra fine motor practice, taking one at a time from the stack and arranging them on the tray. 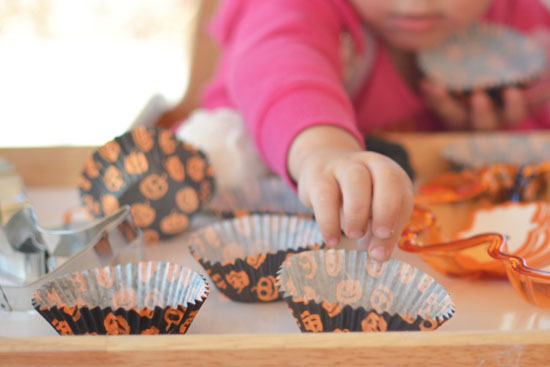 After several cupcake toppers had fallen apart on her earlier, she tried her luck with a sturdier toothpick and stuck it in the white play dough repeatedly with satisfactory results. 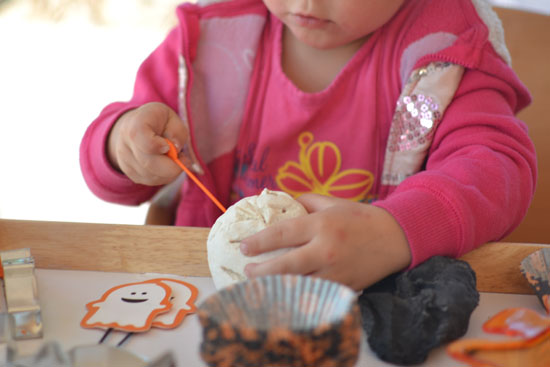 Suddenly, she asked me to hand her the bags I’d stored the play dough in and started sorting the supplies {not the play dough} into them. 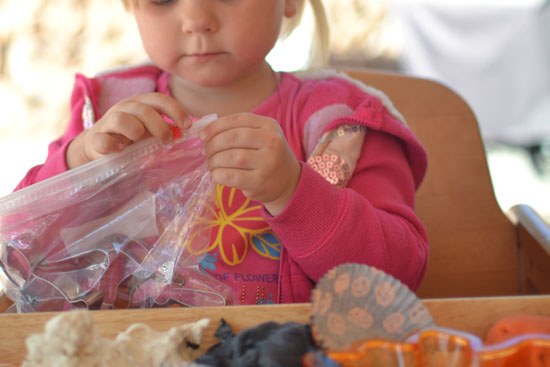 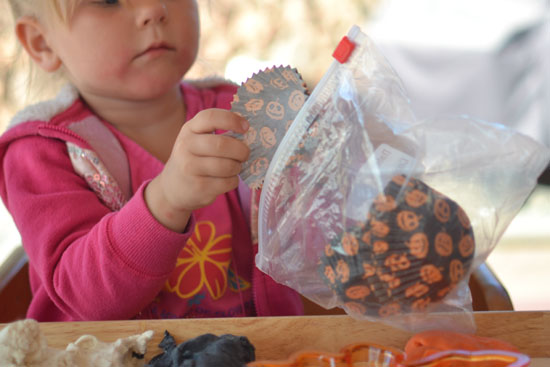 The cupcake toppers went into the third bag – but E immediately decided to dump them out again and engage in a bit more play dough poking. 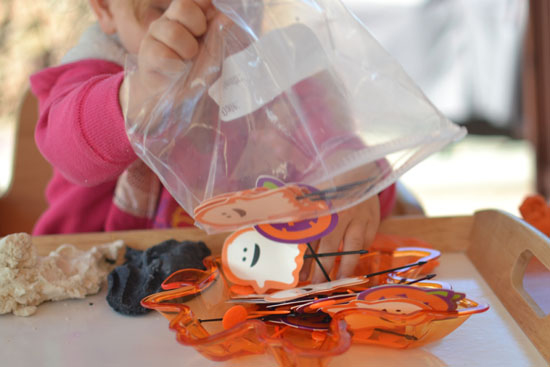 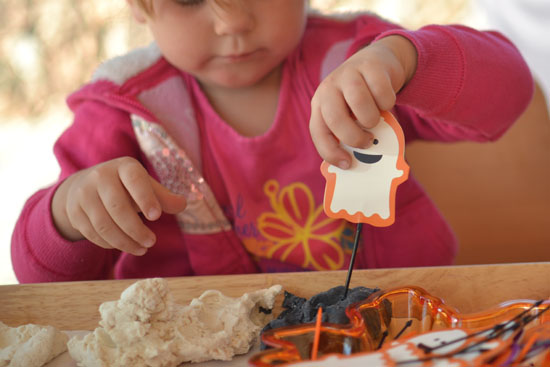 She ended up leaving the cupcake toppers and toothpicks in their bowl and declared she was finished. She would’ve left the play dough out but after a few gentle reminders and providing her with two more bags, she bagged them for further storage. 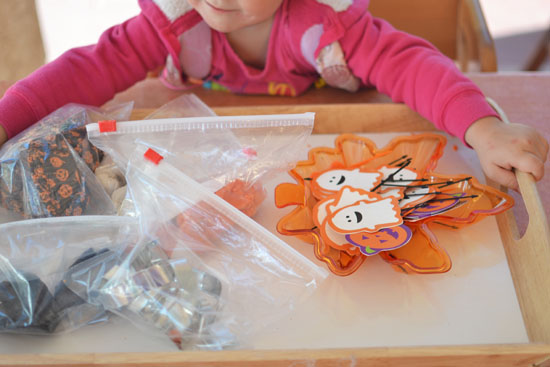 I left the tray out because I had a feeling that E would want to play with it again. And indeed, she asked for it the very next morning, even before breakfast. She did a few of the same things again that she did the first day and tried a few new avenues of exploration, as well. 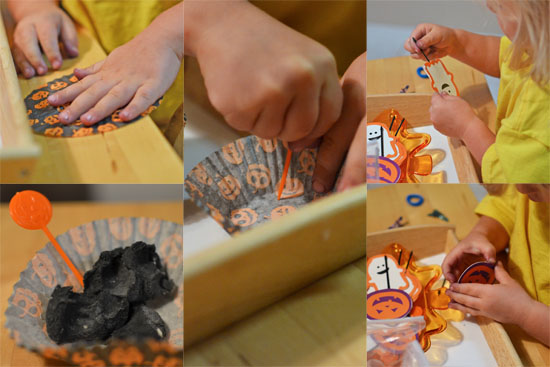 Have you made Halloween play dough? What are your favorite Halloween activities for kids? Leave a comment below!