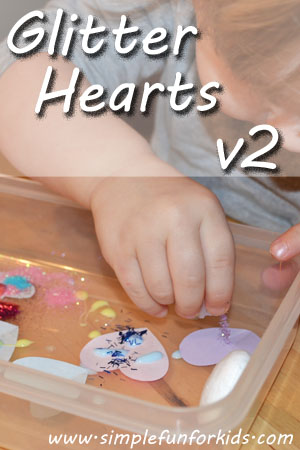 The short version: Cover the hearts with glue as much or as little as you’d like, add glitter, allow to dry.

The idea: E came up with this craft idea all by herself – no doubt inspired by our previous version of Glitter Hearts and her basic love for glitter.

E worked on this extremely diligently and focused for quite a long time (almost 30 minutes). She got quite a kick out of getting to use all the colors of glitter we had, so much so that she didn’t even mind that I only gave her a small amount of each color. I put some glitter in the tube lid in order for her to be able to control it more easily, and in hopes of slightly less mess (it worked but really just slightly – we still had glitter all over the place when we were done 😉 )

It was amazing to watch E put the glitter (mostly) in what she considered just the right spot on top of the hearts, add some more glue here and there, and just follow her own ideas the whole time. She even shook the container in the end (after I’d helped her put the lid on), just like we did with our first version of Glitter Hearts. I don’t think the shaking made much of a difference, though, since the glue was already covered with a thick layer of glitter 😉

What I learned: My toddler can make really pretty craft projects with no input from me <3