My daughter E turned 5 last week! I don’t even want to think about how that could possibly have happened so quickly to begin with, but there it was!

Last year was the first “big” birthday party with friends, and she requested a frog theme. This year, it had to be FROZEN. She’d been saying it for months, and she never changed her mind. {She did plan out the next couple of birthday themes already and switched them around on occasion, but I’m here to tell you, they center heavily on My Little Pony and FROZEN again 😉 }

Thankfully, it’s easy to decorate and cater a FROZEN party, since becoming a kids’ activities blogger has NOT magically turned me into a decorator and master chef 😉 I’m all about SIMPLE activities for a reason!

This snack recipe I made for E’s birthday party was about as simple and effective as they come: FROZEN Chocolate Popcorn! I was so happy that I decided to give it a try about 24 hours before the party 😉 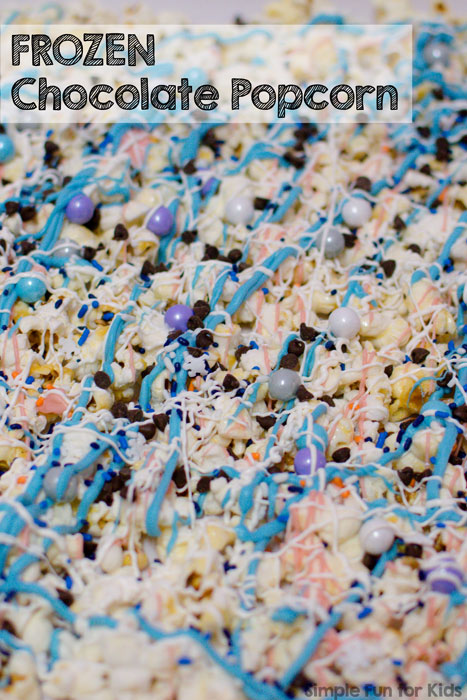 This would also work great if you have kids helping since it’s super straightforward and forgiving, but E was doing something else at the time. Well, N was running around in the kitchen, but even though he was being super cute, I just wasn’t able to count it as helping 😉 With how simple this recipe was, he just added a few minutes to my time working on it, though.

As a first step, I made popcorn in a skillet for the first time ever! I was a little worried about it burning, but it didn’t, and it tasted AWESOME! I let my husband try a piece, and he was like “Well, you know what you need to be doing for every date night now!” 😉

I used 3/4 of a cup of popping corn with a little oil and sugar, and it was the perfect amount for my skillet. 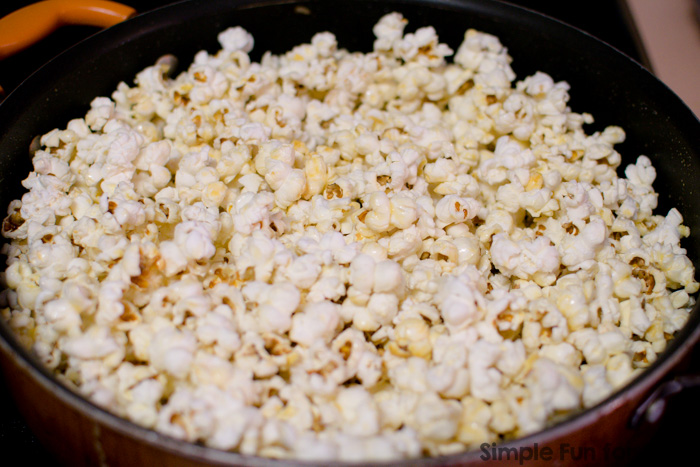 It took a bit longer than I’d expected for the kernels to start popping, but when it started, it was actually fun 🙂

I spread out the popcorn on the counter to make a single layer. I didn’t really wait for them to cool down or anything. {You could use cookie sheets, but you’d need several, and it’s really not needed. You could even do it right on the counter top. It’s not very messy. The only advantage of having something underneath is that it’s easier to dump the sprinkles that don’t end up sticking to the chocolate on top of the finished popcorn.} 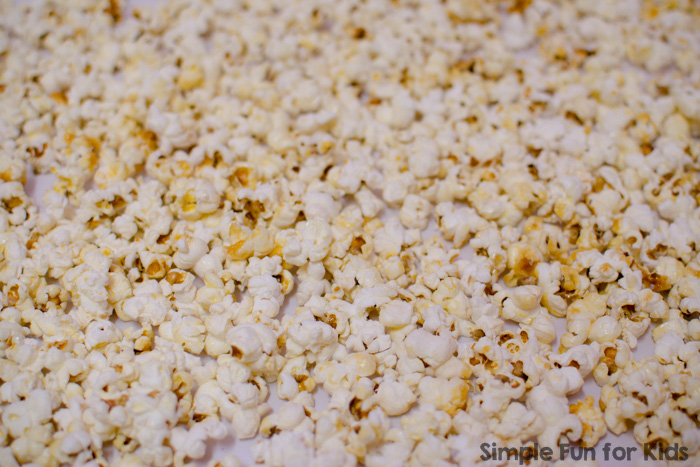 I melted some candy melts in the microwave and expected them to get runny enough to pour over or drizzle on the popcorn. Don’t waste your time trying, it doesn’t work that way.

Instead, I put the melted chocolate into a ziploc bag and cut off a tiny corner to make a piping bag. It was quite hot at first while I was squeezing the bag, but it wasn’t unbearable. After a while, I noticed that I could have let the chocolate cool down way more and still be able to pipe it on the popcorn.

I used white and pink candy melts and a few sprinkles first. It looked nice, 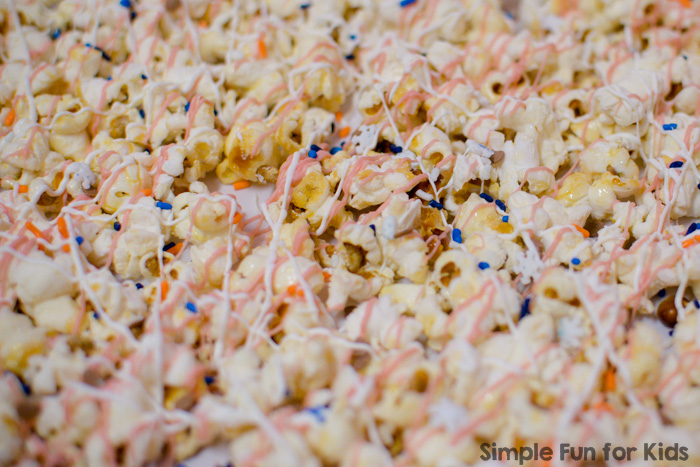 but it wasn’t until I used blue candy melts that it really “popped” and started looking more like FROZEN!

The candy pearls and mini chocolate chips topped the whole thing off nicely. 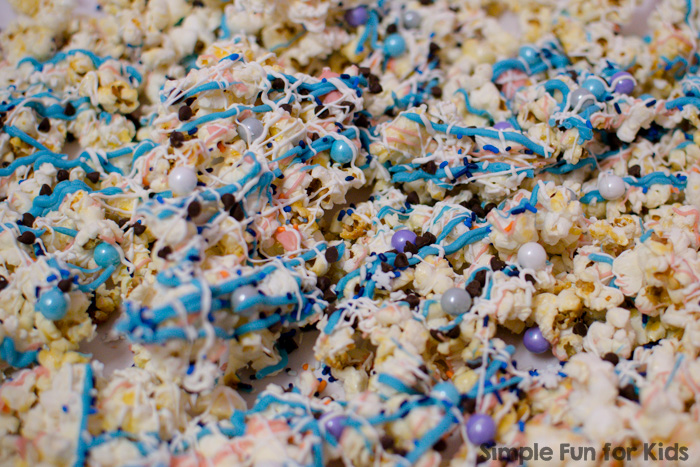 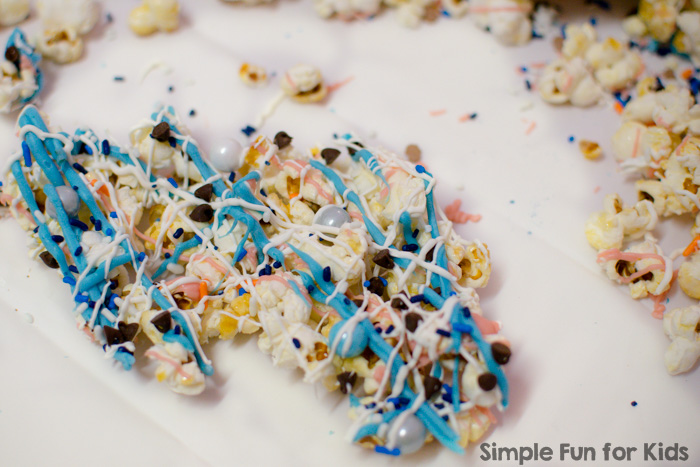 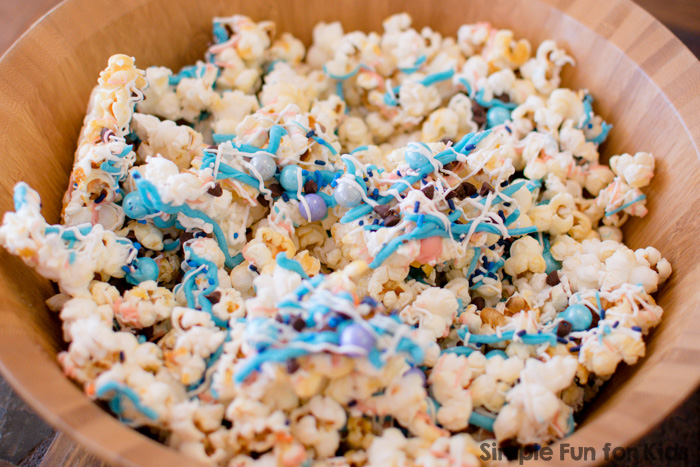 but saved some to put into clear plastic cups in the hopes that our guests would get the idea that using the cups was a good idea while walking around with larger amounts of popcorn. I was thinking that the cups would cut down on popcorn, sprinkles, and chocolate getting tracked all over the house, and indeed, this snack didn’t make much of a mess! 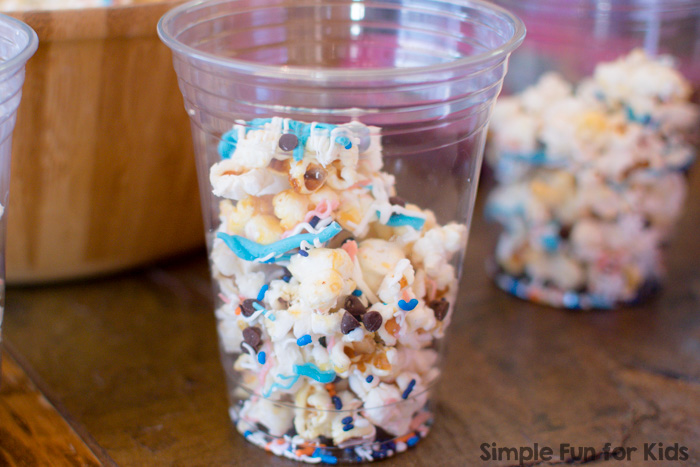 This FROZEN chocolate popcorn was really quick and simple to make, had a definite FROZEN look, and tasted great!

If you wanted to, you could make it even faster using pre-popped popcorn!