When we recently had friends over for a little barbecue, I knew that between the three girls, the bigger kids could entertain themselves – and Baby N is never bored, anyway.

I still wanted to offer a simple activity just in case they were interested.

I had a few criteria for the activity:

Last year, the same group of kids had a Fizzy Baking Soda Play Date that they really enjoyed – only Baby N didn’t get into that one because he was only 3 months old 😉 This time, I wanted something he could participate in in some way because I knew that short of putting him on the other side of a gate, there would be no way to keep him from trying to play.

A lot of criteria to be sure but I kept it simple, and it was indeed a big hit for all the kids: I decided to set up a Coral Reef Sensory Soup in the water table with a little water, plastic figures, a few kitchen utensils, and lots of room for imagination! 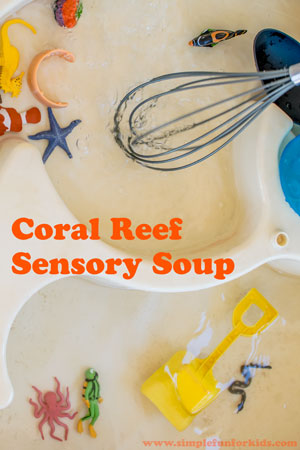 I wanted to set up the Coral Reef Sensory Soup myself before our guests came but I only got as far as putting some water into the bottom compartment of the water table. That’s when E came straight over and insisted on doing the rest herself.

She got a little wet 😉 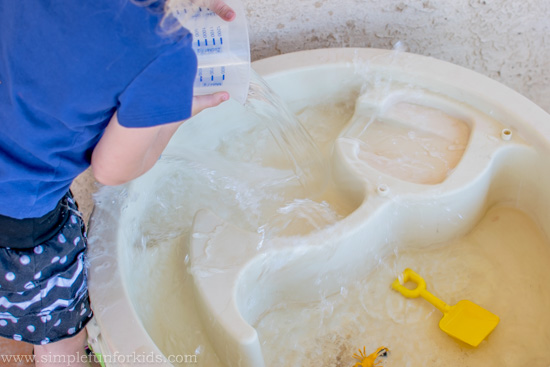 We’d never played with the coral reef toob before, and as E was pulling out the items, she asked me to read the names that are engraved on each figure. She carefully placed them in just the right spots in the water table. 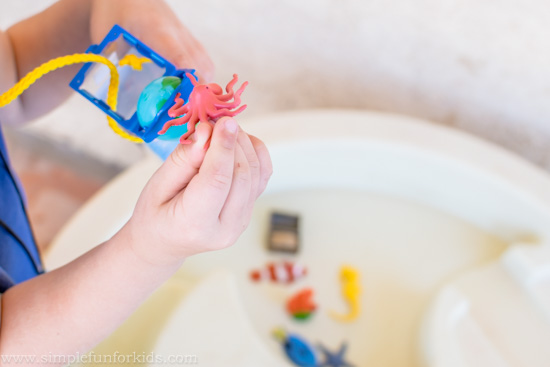 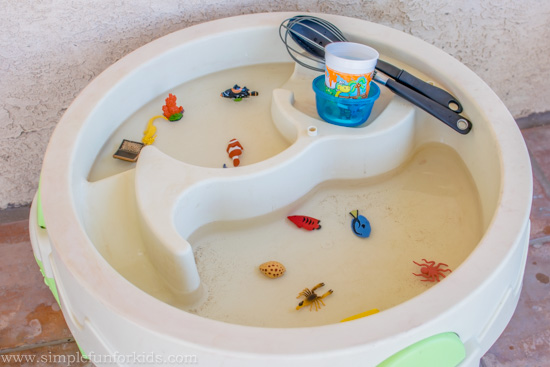 She had a ton of fun with the whisk and used it to pick up items and pull them out of the water. 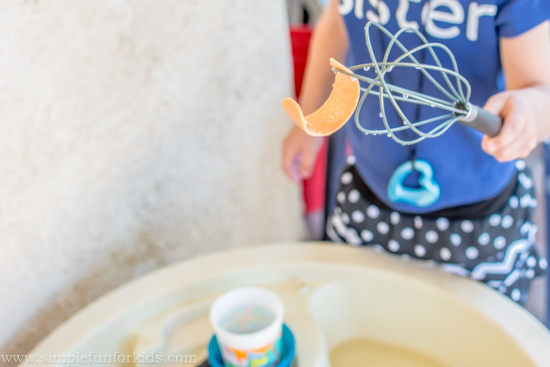 She also spent quite a bit of time just whisking the water. 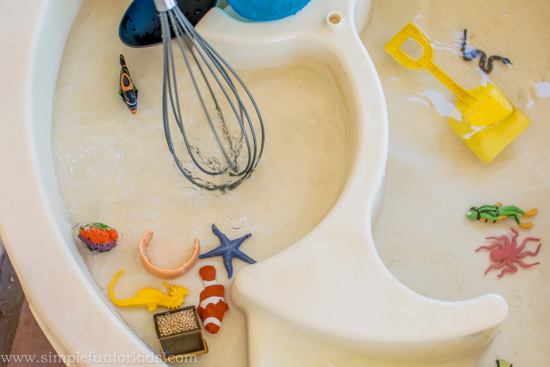 She did more scooping and pouring before our guests arrived.

As the girls started running around the backyard together, N used the opportunity to explore the water table by himself.

He was pretty excited about that scorpion 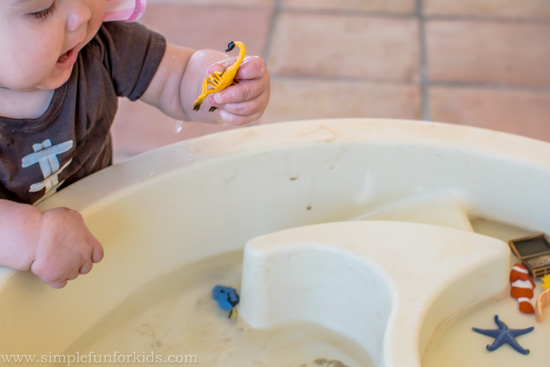 used the ladle for the first time, 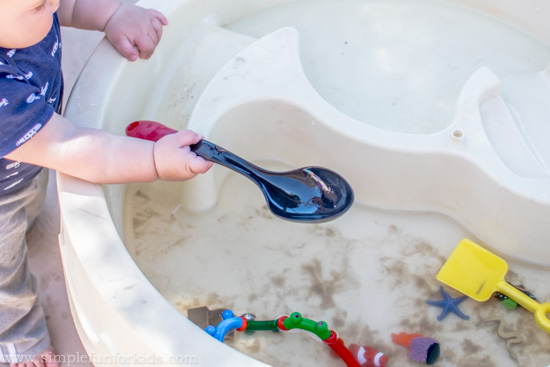 and of course slapped the water – his favorite kind of water play 🙂 {Looking at the pictures, I really wonder where all that sand came from. It certainly does fit the theme, though 😉 } 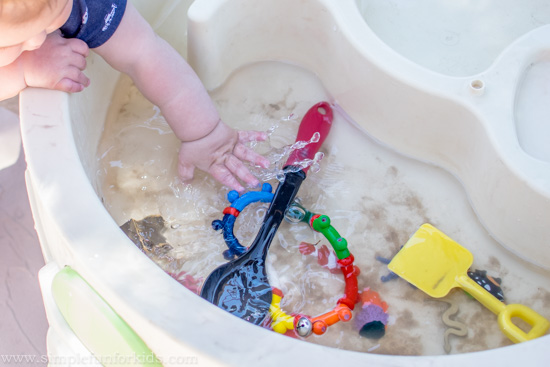 After a while, L and M checked out the water table but L was more interested in using water and tools from the activity to cook a “noodle soup” in the sandbox with E. 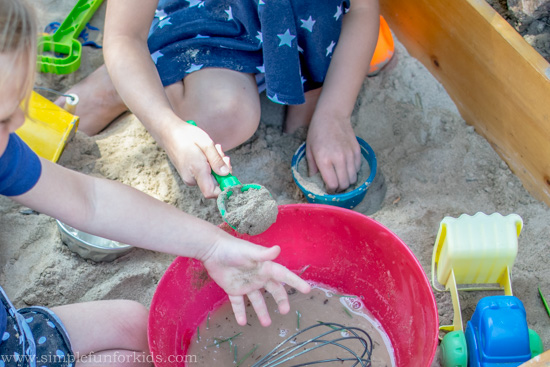 N and M stayed with the coral reef sensory soup the longest, having fun just playing along side each other. 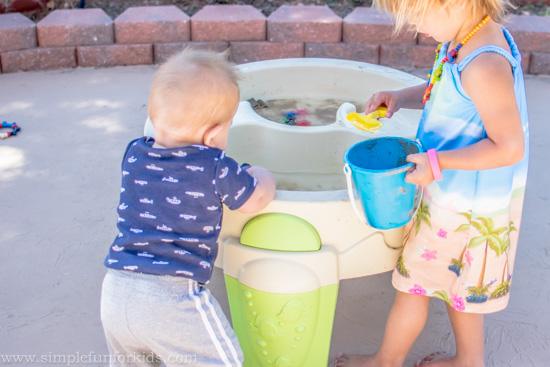 M really enjoyed playing with the plastic animals, and by the end of the day, she’d arranged most of them on the table. 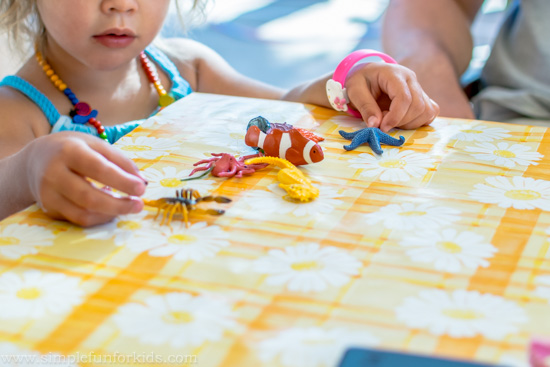 Looking for other water play ideas?

Colored Ice and Water in the Water Table

Pine Cones and Acorns in the Water Table

Do your kids love water play? Do you? What’s your favorite activity for kids of different ages? Leave a comment below!