As you know, we’re always looking for new ways to enjoy the baking soda and vinegar reaction.

Two Halloweens ago, we did Halloween Surprise Eruptions – still one of my very favorite activities!

Last year, I saw a post by Kids Play Box where they used an egg carton to make mini volcanoes that erupted with baking soda and colored vinegar.

I loved the idea of using an egg carton in this way but switched it up by using plain vinegar and hiding the color in apparently plain baking soda. E LOVED her Color Surprise Eruptions! 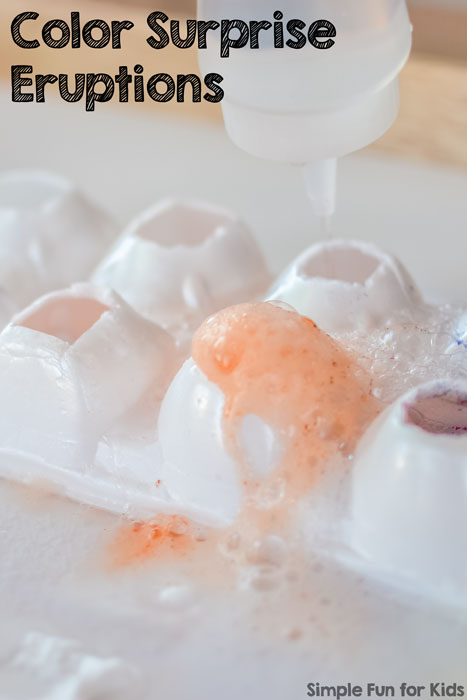 I cut off the lid of the egg carton without really thinking about it, but you could leave it on.

After I’d turned the bottom part of the egg carton over, I cut out the bottom of the individual compartments with a sharp, pointy knife.

I placed what was left of the egg carton on a tray and spooned some baking soda into each compartment. On top of that first tablespoon of baking soda, I put a little powder tempera. Just to make things more interesting, I added some glitter to some of the compartments. 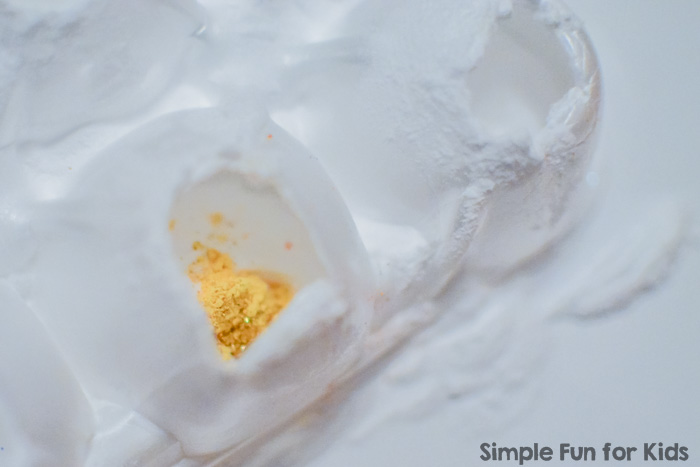 After I added more baking soda on top of the powder paint and glitter, this is what it looked like. I spilled plenty of baking soda, but that just didn’t seem like it would detract from the activity at all 😉 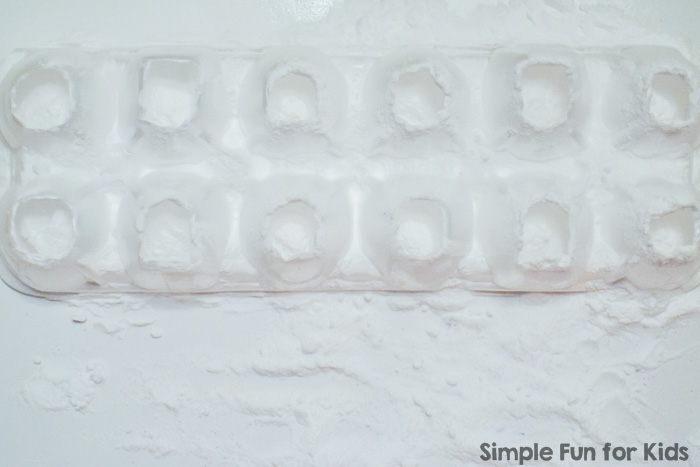 I presented the tray to E on a table outside, along with a squeeze bottle full of vinegar. She was very excited and got right to work. 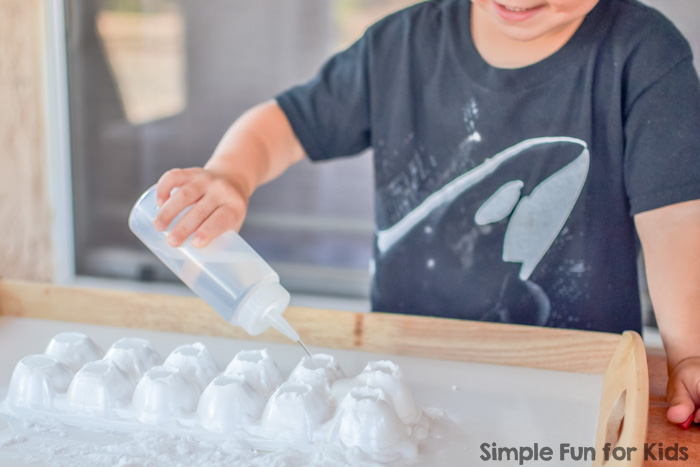 The color surprises worked out nicely, but the colors spread underneath the egg carton between compartments and mixed to a certain degree. No big deal, just not something I had really anticipated. 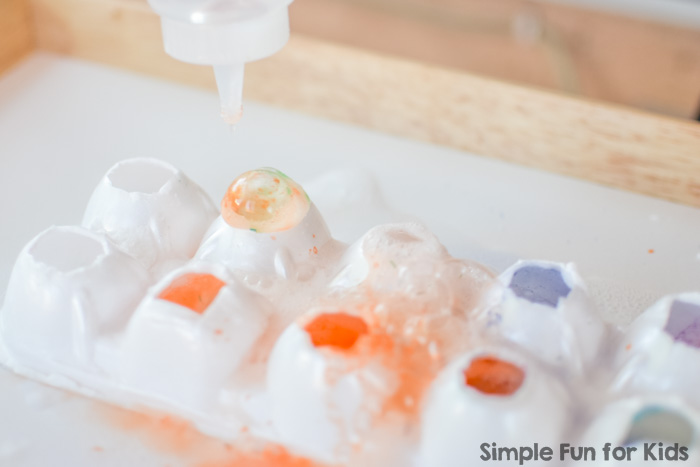 Still a lot of fun, and so colorful 🙂 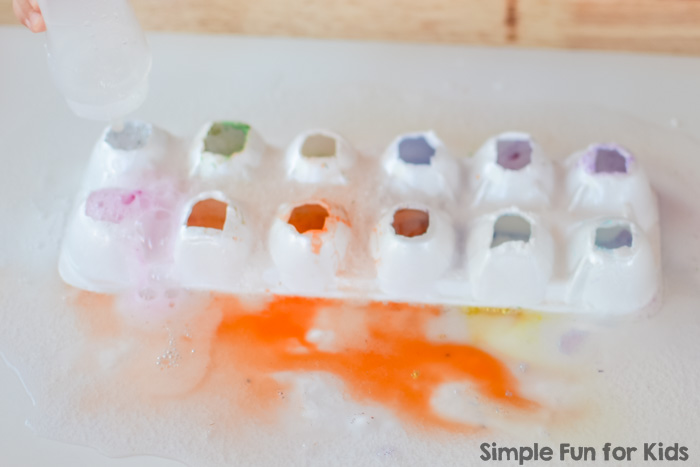 After a while, I removed the egg carton and let E loose on the colored baking soda. The first thing she did was stick her hand in it 🙂 {Wet baking soda feels so soft and squishy – you should try this if you haven’t done it before! Heck, do it regardless of previous experience 😉 } 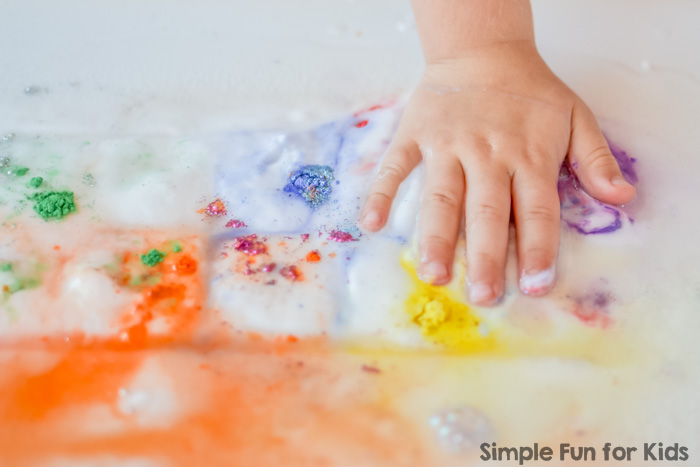 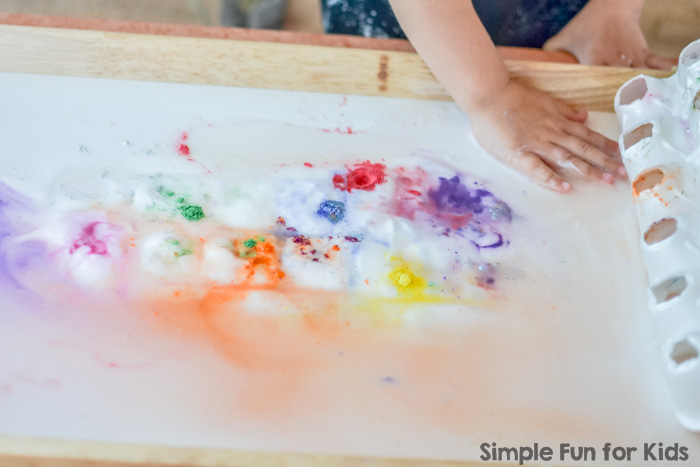 before she started causing more eruptions. The colors were even more impressive this way! 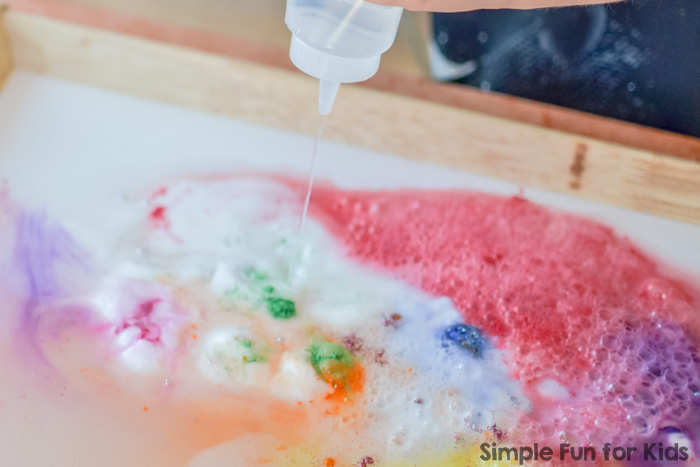 After she’d used all of the vinegar in the squeeze bottle, E spent some more time handling the baking soda and vinegar mix and tried to pick up the little glitter bubbles that formed. That didn’t work so well, but she sure thought it was fun 🙂 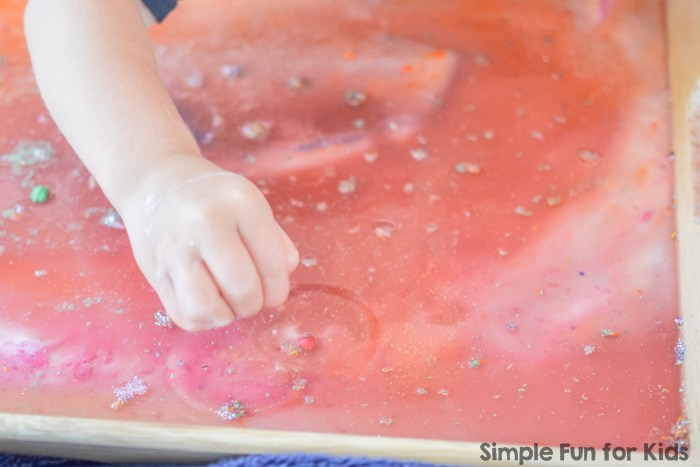 She still hadn’t had enough of the eruptions, so she asked for more vinegar. I filled her bottle up again, and even though the baking soda was already flooded with vinegar at this point, the reaction was still strong and as awesome as ever! Interestingly, the bubbles were now white. 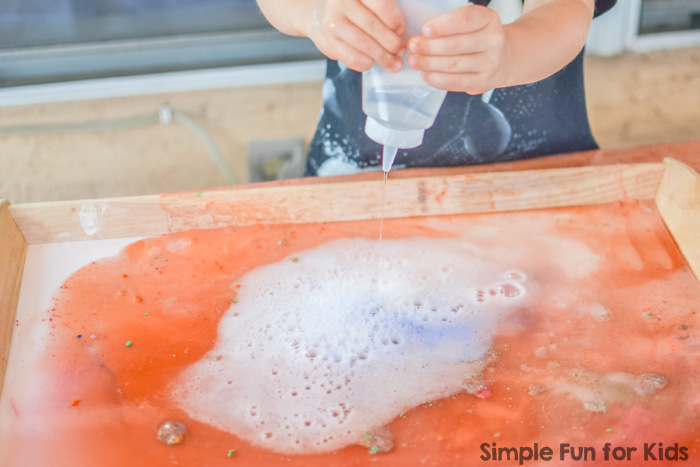 As usual with baking soda and vinegar, this activity was very easy to clean up when E was done with it. We just rinsed off the tray, and it ended up being cleaner than it had been before we started playing 😉

How do you like to play with baking soda and vinegar? Know any fun activities using recyclables? Leave a comment below!