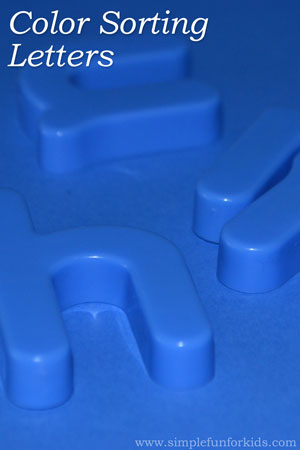 We have a bucket full of magnetic letters in 6 colors that E has become quite interested in, so as kind of an early introduction to letters, I had E sort them.

I put out six squares of Origami paper on the table, placed a blue letter on the blue square, E immediately realized what I was trying to tell her, and got right to it. {The doggies were her special touch 😉 }

She started sorting a few letters,

then decided she was better off just dumping them all on the table.

She played with them a bit

before she somehow decided she really liked the “i”s.

{I’m still stumped as to how she picked them out, we’d never talked about them before or anything. When I noticed her interest, I told her the letter name, and she soon started saying it. She also started recognizing the letter shortly after. I really hadn’t expected anything like that at all.}

She picked out all the “i”s and sorted them.

Apparently, that was the extent of her interest in color sorting letters for the day, and she played with her dogs for a while.

Finally, she finished off the activity by putting all the letters back in the bucket – I didn’t even have to say anything!

E really liked this activity, judging by the number of times she’s initiated it after the first time. She always starts out sorting a bunch of letters, soon goes for the “i”s, and once they’ve all been sorted, she loses interest. It’s really amazing to see how fascinated she is by this letter.

You can do this without colored paper. E initiated a simpler version of this activity the next day when she simply placed letters of the same color next to each other.

I also have a simple printable sorting mat that works great.