E loves playing with clothespins – whether it’s her Clothespin Color Matching Game or simply clipping them to a page in a book.

We don’t really hang up our laundry around here but I’ve long had an idea at the back of my mind of hanging up a mini clothesline and clipping photos, E’s artwork or small items she loves to it.

Then I saw this post at Planet of the Apels a while back, and I knew I had to do this, even though it took me quite a while to get around to it on my list. 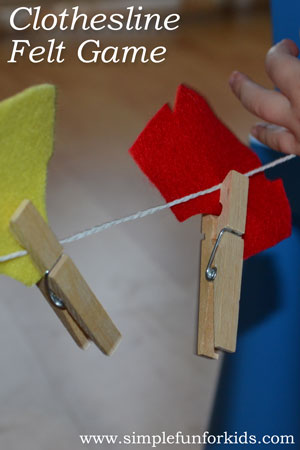 I cut out the felt clothes while E wasn’t home 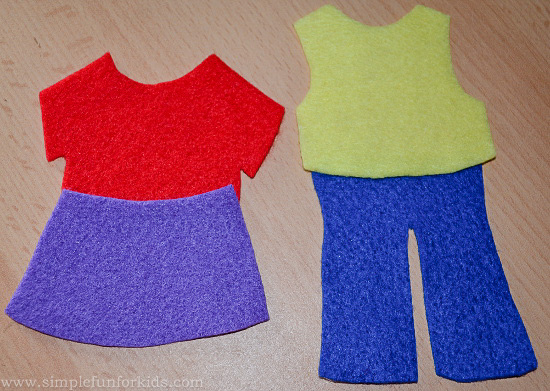 then set up an invitation to play. 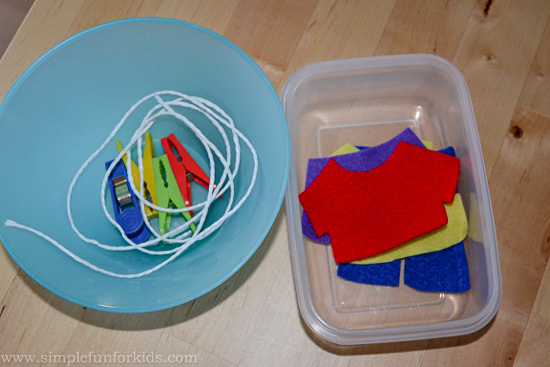 I’d originally bought slightly smaller plastic clothespins (as seen in the second photo above) for use with this game because I thought the wooden ones we had were too heavy, and smaller ones would look better.

Unfortunately, E was unable to work the plastic ones, so I gave her the regular wooden ones, and she had a blast.

I put the miniature clothesline up between two toddler-sized chairs, making sure to position them so that they’d fall over if in a freak accident, E should fall on the clothesline. 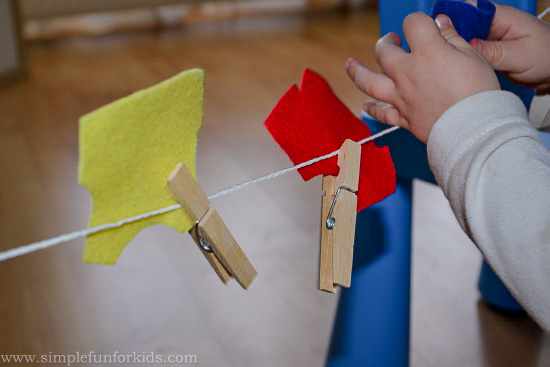 As I’d suspected, the regular clothespins were too heavy to keep the clothes pointing down unless they were clipped on exactly right. However, that didn’t matter to E at all. She was all about clipping the clothes to the line and didn’t care if it looked “realistic”. At first, she asked me to hold the clothing for her while she clipped, then started doing both.

When she was done for the day, I suspended the clothesline on E’s bookshelf for free access while minimizing the risk the string poses. 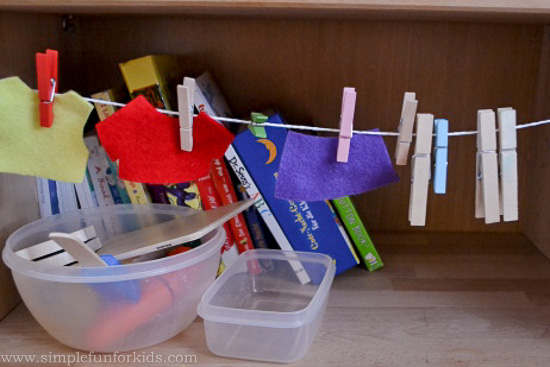 In this last picture, you can also see some of the miniature wooden clothespins I ended up buying. They do look better and are a tad easier to put on “right” (with the clothes pointing down).

Several times a day, E goes to take off or put on some clothes, or simply to clip a few more clothespins on the line. She also points at the clothesline regularly and says “Cool!”, so I think she likes it 😉 She still asks me to hold the clothes for her while she clips sometimes but I don’t mind, she just wants to engage with me.

Does your toddler enjoy clothespins? How do you use them with your kids? Leave a comment, and feel free to include a link if you’ve written about it!