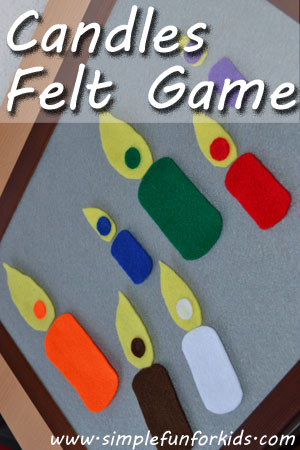 How to make the felt candles: 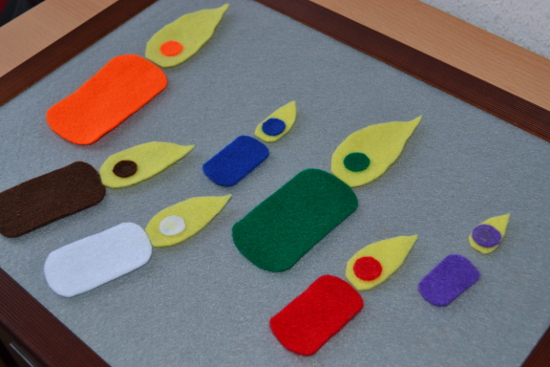 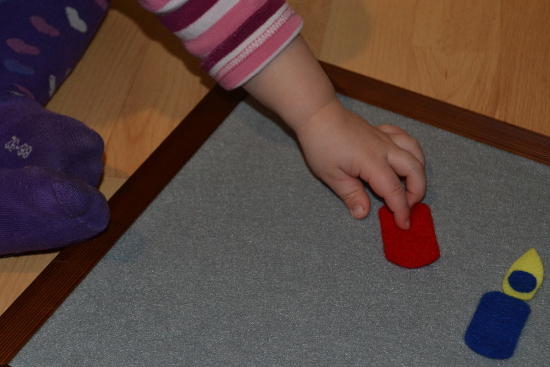 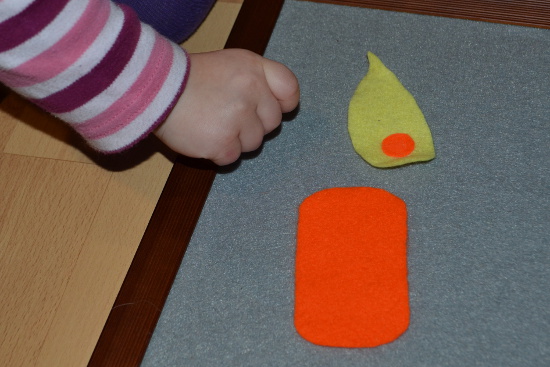 After freehanding my first candle, I realized that a flame that’s the same color as the candle (for color matching) isn’t really that visually appealing. Okay, maybe it was just that my “artistic talent” (I use that term loosely) didn’t allow for a readily identifiable colored flame, but either way, I decided that the flames needed to be yellow, and that I’d simply cut out a small circle in the candles’ colors and glue it to the flames.

And then inspiration hit me: Instead of making a bunch of candles all the same size as I’d initially planned, I’d stagger their sizes so they can be used for sorting by size in the future.

Because I didn’t want to freehand that kind of a project, I decided to draw a pattern on the computer and progressively re-size the candles and matching flames. I’m really not good at drawing, much less on a computer, but I thought it came out looking okay after cutting the shapes out of felt.

For the colored circles, I used a small coin – it just fits on the smallest flame. I first used white glue for the circles but I never managed a really tight bond, and I didn’t like how the glue tended to soak through the felt. I finally used a simple glue stick with much better results.

E really liked the candles right away but didn’t really know what to do with them (it was her first felt board game), so she had me put them on the board and take them off over and over for a while.

After a few attempts (she kept asking for it, otherwise I would’ve left it alone for a while), she realized that the circles were meant to stay on the flames, and started matching them that way. She doesn’t put the flames right on top of the candles yet but she’s pretty close. She still has me do part of the candles, and then we take them all off the board again to start over 🙂

I haven’t suggested sorting by size yet, and I don’t think she’s ready for it.

I’ve seen lots of lovely felt game ideas for felt boards, many of them designed to act out a book or song.

E’s favorite song that she asks us to sing all the time is about candles {a German song she picked up at the baby club}, so I started looking for felt board games that had candles in them.

I wasn’t able to find any (although I’m sure they exist – drop me a line on Facebook if you know any), so I decided to just freehand some candles – couldn’t be that hard, right? I figured E could use them while singing the song, and also do some color matching on the side.

If you aren’t comfortable drawing your own pattern, or want to save a few minutes when making this felt game, you’re welcome to use mine as a free printable.

The page has seven candles and matching flames in 10% increments from 100% to 40%. As mentioned above, a one Euro cent coin fits the smallest flame exactly. If your currency doesn’t have coins that small, you could either skip the smallest candle, find a smaller round object as a pattern, or use a different shape to glue to the flames.