When E turned 4 last week, she had her first big birthday party with lots of friends. Of course, it all went by wayyy too fast, and she’s talked about her next birthday party every day since.

We always have a snack together when she comes home from preschool, and a few days after her birthday, I turned our snack into a quick and simple birthday after party as a fun way to relive some of our favorite aspects of her birthday party. 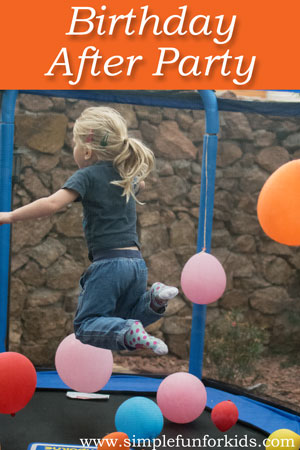 How I set up our birthday after party:

I only used items that were left over from the actual birthday party and intentionally kept it very simple.

We had a lot of cupcakes left over, so I took two of them out of the freezer, and they were awesome and just like fresh once they were thawed. {I’ve recently found out that cupcakes are also great still frozen, by the way – and depending on the icing, it can actually be a great no-mess alternative to eating them in a more “traditional” way! As you can see below, it might have been a good idea to go that route 😉 }

I put the cupcakes on two of our lime green party plates, added lime green party napkins, juice boxes, and one of E’s favorite birthday items – party hats! It clearly wouldn’t have been a proper birthday (after) party without them 🙂 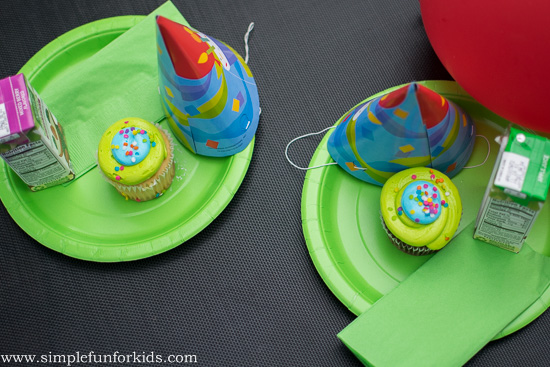 I placed all the balloons we had left over in the trampoline she’d received for her birthday – she loves it, and it seemed like an extremely fitting and special spot to have our birthday snack!

Just before I picked E up from preschool, I put the snack plates down and really really really hoped it wasn’t going to rain. Luckily, it held off until the evening. 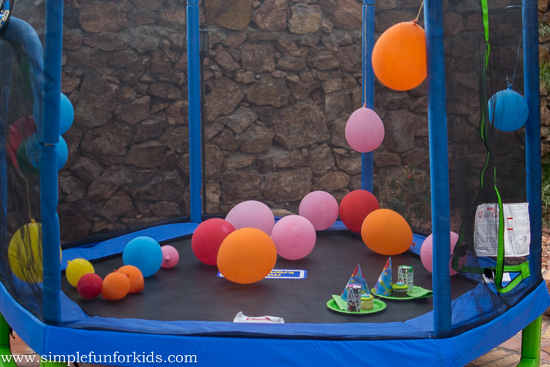 When we got home, I told E I had a surprise for our snack today and got her to go outside to look for it. She was SO excited when she opened the back door!

She squealed with delight when she climbed onto the trampoline. 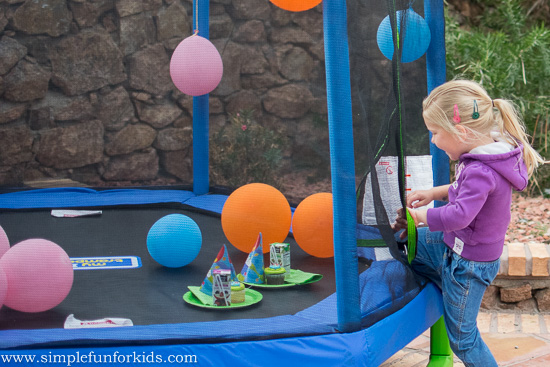 The first thing that happened was that her juice box tipped over into her cupcake, and she oh so tragically had to lick off the icing – it took a while because she was giggling and getting such a kick out of it 😉 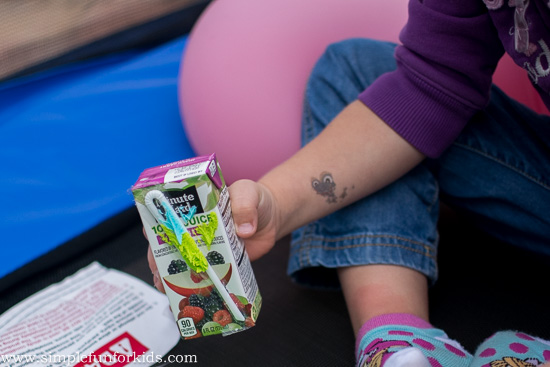 Baby N wanted to join us, so I put him on a blanket and E gave him a balloon to hold 🙂 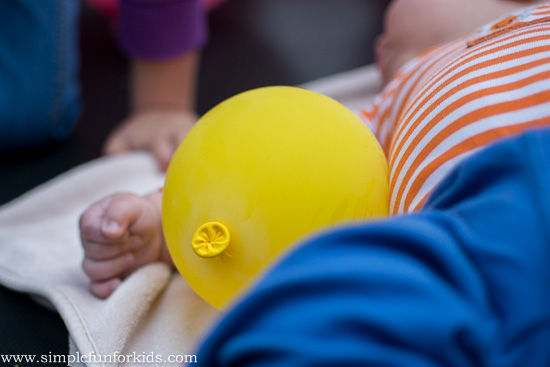 E and I wore our party hats, drank our juice, ate our cupcakes and talked about her birthday. 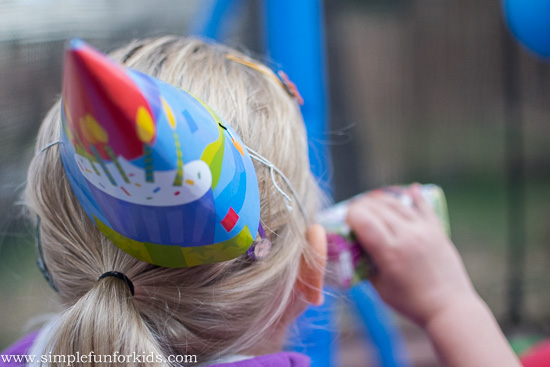 E and N played with balloons and with their hands and feet. 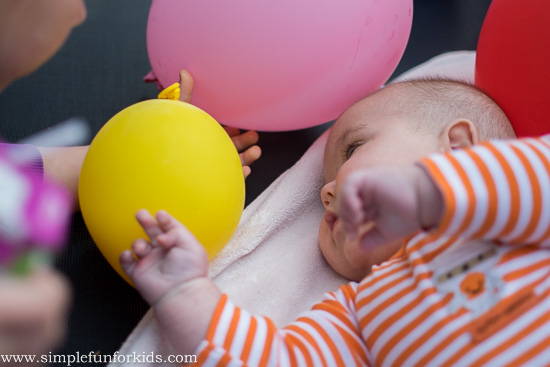 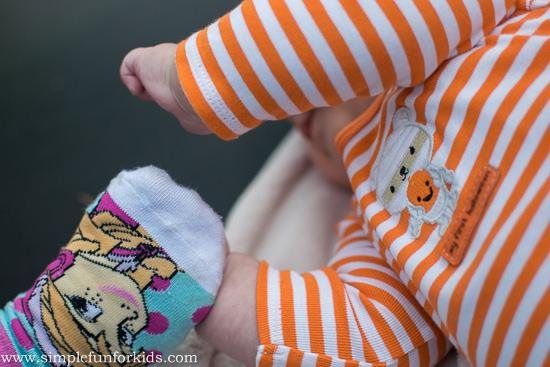 {Yes, my kids are definitely known for wearing cute Halloween AND Christmas clothes in November – okay, usually not both kinds at the same time 😉 N doesn’t really tell me yet whether he likes it or not but E picks out her own clothes, and she definitely rocks the Christmas stuff 🙂 }

N was even able to get in some practice at rolling over {he hadn’t quite managed yet at that point}. 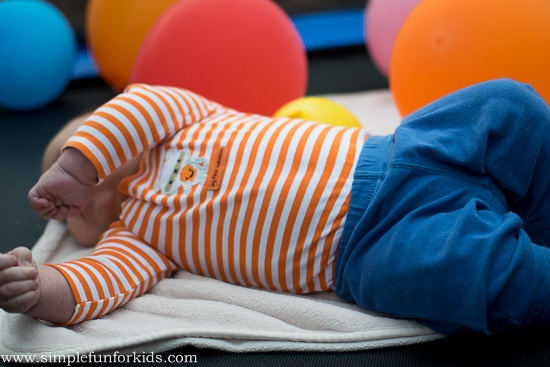 And when the snack was all gone, N and I left the trampoline, took all the extra items with us, and E jumped with the balloons. 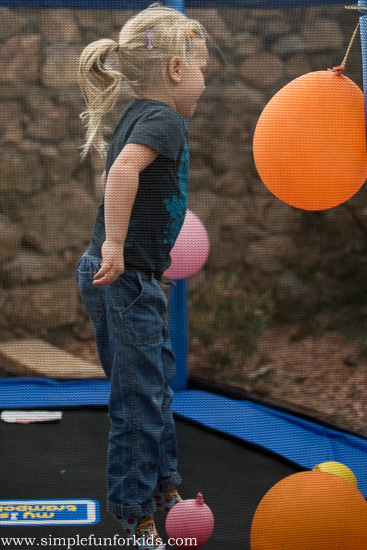 After a while, she decided to take a break and count how many balloons of each color she had. 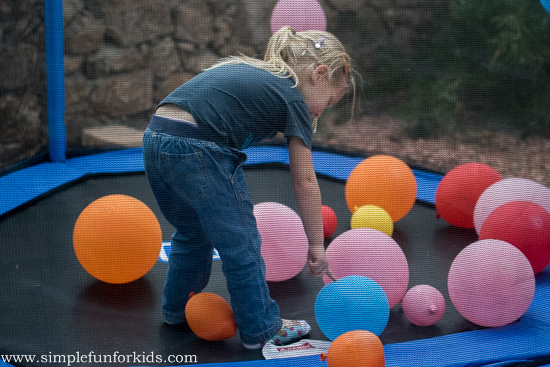 And then, there was more jumping – a lot more! 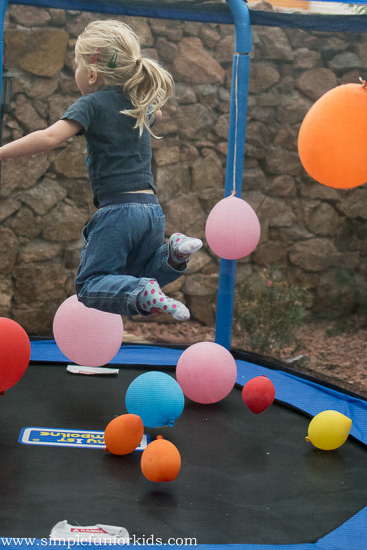 This simple idea was so much fun for all three of us – I definitely want to make this a tradition and do it again after future birthdays!

Are your kids as excited about birthday parties as E is? Have you built on that enthusiasm? Tell me in the comments!